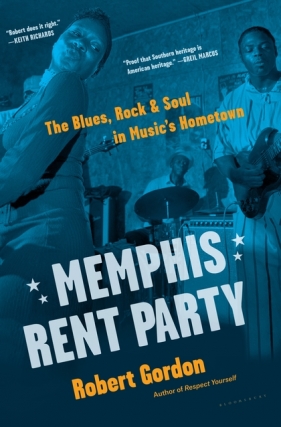 Renowned blues historian and Memphis native Robert Gordon crashes A Cappella Books to share with us his most personal book yet, telling of his lifelong musical love affair in Memphis Rent Party: The Blues, Rock & Soul in Music's Hometown.

ABOUT THE BOOK
"Blues, being the wellspring of all American music for over a century, is always worth studying. Robert does it right." --Keith Richards

"An emotional map of musical Memphis. If you don't know these characters, let Robert Gordon introduce you." --Elvis Costello

"Robert Gordon's book is proof that Southern heritage is American heritage, and all sorts of people--black and white, familiar and strange, dead and alive--are what it is." --Greil Marcus

Profiles and stories of Southern music from the acclaimed author of Respect Yourself: Stax Records and the Soul Explosion.

The fabled city of Memphis has been essential to American music--home of the blues, the birthplace of rock and roll, a soul music capital. We know the greatest hits, but celebrated author Robert Gordon takes us to the people and places history has yet to record. A Memphis native, he whiles away time in a crumbling duplex with blues legend Furry Lewis, stays up late with barrelhouse piano player Mose Vinson, and sips homemade whiskey at Junior Kimbrough's churning house parties. A passionate listener, he hears modern times deep in the grooves of old records by Lead Belly and Robert Johnson.

The interconnected profiles and stories in Memphis Rent Party convey more than a region. Like mint seeping into bourbon, Gordon gets into the wider world. He beholds the beauty of mistakes with producer Jim Dickinson (Replacements, Rolling Stones), charts the stars with Alex Chilton (Box Tops, Big Star), and mulls the tragedy of Jeff Buckley's fatal swim. Gordon's Memphis inspires Cat Power, attracts Townes Van Zandt, and finds James Carr always singing at the dark end of the street.

A rent party is when friends come together to hear music, dance, and help a pal through hard times; it's a celebration in the face of looming tragedy, an optimism when the wolf is at the door. Robert Gordon finds mystery in the mundane, inspiration in the bleakness, and revels in the individualism that connects these diverse encounters.