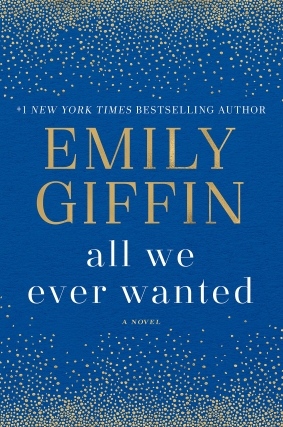 Please note: Emily Giffin will not be signing books this evening; all books will be pre-signed. She will be available for photo opps with guests after the talk.

In Conversation with Mara Davis

Dubbed by Vanity Fair as “the modern day Jane Austen,” Emily Giffin has released a new novel delving into the mores of modern human relationships. In All We Ever Wanted, three very different people are brought together by an all-too-familiar woe: a photograph drunkenly snapped at a party. Nina Browning is effectively a “Real Housewife of Nashville” who wonders how far she has strayed from her small-town roots; Tom Volpe is a world-weary yet optimistic single father, working multiple jobs to support his daughter Lyla; and Lyla herself just earned a scholarship to Windsor Academy, Nashville’s most prestigious private school, where she struggles to navigate her new glitzy world. In our current social media-obsessed era, we can all intuit the grim consequences of a sensitive photo going viral, which is exactly what happens in Windsor. However, amid all the controversy and finger-pointing, Nina, Tom, and Lyla become enmeshed in each other’s lives, spurred to consider themselves and their relationships anew, and to bravely reframe their notions of happiness and meaning.

Emily Giffin is the author of eight New York Times bestselling novels, Something Borrowed, Something Blue, Baby Proof, Love The One You're With, Heart of the Matter, Where We Belong, The One & Only, and now All We Ever Wanted. A graduate of the University of Virginia School of Law, Giffin practiced law for many years while writing her first manuscript in her free time. The initial rejections she faced did not stop her from leaving law to pursue her passion full time in London. There, she penned Something Borrowed (2004), which ultimately earned her an agent, two-book deal, and worldwide reputation as a canny cartographer of the human heart. Her eight novels have achieved bestseller status in numerous countries, been translated into 31 languages, and sold over eleven million copies worldwide. Five of her novels have been optioned for the silver screen, Something Borrowed having been the first to hit theaters in May 2011, starring Kate Hudson, Ginnifer Goodwin, and John Krasinski. Giffin currently lives in Atlanta with her husband and three young children.

*includes signed copy of All We Ever Wanted, wine and dessert reception, and photo opp with Ms. Giffin