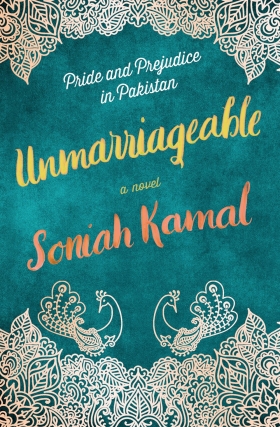 Atlanta author Soniah Kamal debuts her new novel "Unmarriageable" at the first Writers at the Wrecking Bar of 2019.

It is a truth universally acknowledged in Atlanta that the Writers at Wrecking Bar fiction series has become the city's go-to literary event. That's why a partnership between A Cappella and Soniah Kamal seemed like the perfect match. We're thrilled that she accepted our proposal to launch her new novel "Unmarriageable" here in January.

Kamal will be in conversation with another hometown favorite, New York Times bestselling author Joshilyn Jackson ("The Almost Sisters").

Musician Khizer Khan will kick off the evening's festivities with a live set at 7 p.m.

In this retelling of "Pride and Prejudice" set in modern-day Pakistan, Alys Binat has sworn never to marry—until an encounter with one Mr. Darsee at a wedding makes her reconsider.

A scandal and vicious rumor in the Binat family have destroyed their fortune and prospects for desirable marriages, but Alys, the second and most practical of the five Binat daughters, has found happiness teaching English literature to schoolgirls. Knowing that many of her students won’t make it to graduation before dropping out to marry and start having children, Alys teaches them about Jane Austen and her other literary heroes and hopes to inspire them to dream of more.

When an invitation arrives to the biggest wedding their small town has seen in years, Mrs. Binat excitedly sets to work preparing her daughters to fish for eligible—and rich—bachelors, certain that their luck is about to change. On the first night of the festivities, Alys’s lovely older sister, Jena, catches the eye of one of the most eligible bachelors. But his friend Valentine Darsee is clearly unimpressed by the Binat family. Alys accidentally overhears his unflattering assessment of her, and quickly dismisses him and his snobbish ways.

But as the days of lavish wedding parties unfold, the Binats wait breathlessly to see if Jena will land a proposal—and Alys begins to realize that Darsee’s brusque manner may be hiding a very different man from the one she saw at first glance.

Soniah Kamal is an award-winning essayist and fiction writer. Her debut novel, "An Isolated Incident," was a finalist for the Townsend Prize for Fiction and the KLF French Fiction Prize. Her TEDx talk, “Redreaming Your Dream,” is about regrets and second chances. Her work has appeared in numerous publications including The New York Times, The Guardian, Catapult, The Normal School, The Chicago Quarterly Review, The Missing Slate, BuzzFeed, The James Dickey Review, Scroll.in and Literary Hub. She is a literacy ambassador for the Jane Austen Literacy Foundation. A native of Lahore, Pakistan, Kamal and her family currently live in Johns Creek, Georgia.