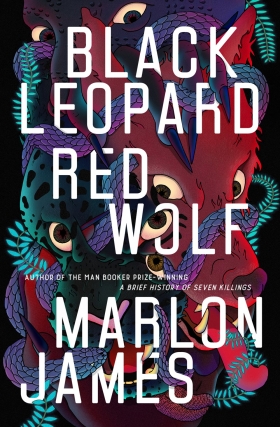 On Friday, Feb. 8th, A Cappella Books and the Carter Center welcome Marlon James, the Man Booker Prize-winning author of "A Brief History of Seven Killings."

James will be in conversation with Atlanta's Nic Stone, New York Times bestselling author of "Dear Martin" and "Odd One Out." The authors will discuss James's stunning first novel in the Dark Star trilogy "Black Leopard, Red Wolf." Billed as an African "Game of Thrones," the Dark Star trilogy blends myth, fantasy, and history together to explore what happens when a mercenary is hired to find a missing child.

A signed copy of "Black Leopard, Red Wolf" is included in the ticket price. A Cappella will have copies of both authors' books for sale. After their conversation, both authors will sign copies of their books.

Tracker is known far and wide for his skills as a hunter: “He has a nose,” people say. Engaged to track down a mysterious boy who disappeared three years earlier, Tracker breaks his own rule of always working alone when he finds himself part of a group that comes together to search for the boy. The band is a hodgepodge, full of unusual characters with secrets of their own, including a shape-shifting man-animal known as Leopard.

As Tracker follows the boy’s scent—from one ancient city to another; into dense forests and across deep rivers—he and the band are set upon by creatures intent on destroying them. As he struggles to survive, Tracker starts to wonder: Who, really, is this boy? Why has he been missing for so long? Why do so many people want to keep Tracker from finding him? And perhaps the most important questions of all: Who is telling the truth, and who is lying?

Drawing from African history and mythology and his own rich imagination, Marlon James has written a novel unlike anything that’s come before it: a saga of breathtaking adventure that’s also an ambitious, involving read. Defying categorization and full of unforgettable characters, "Black Leopard, Red Wolf" is both surprising and profound as it explores the fundamentals of truth, the limits of power, and our need to understand them both.

Nic Stone is the author of the New York Times bestselling "Dear Martin" and "Odd One Out," which Booklist called “essential reading” in a starred review. Her third YA novel "Jackpot," is a life-affirming story about the humanity in people, no matter how little or how much is in their bank account. "Clean Getaway" is Stone's first story for middle-grade readers and explores race relations–past and present–in the American South. An alumna of Spelman College, Stone was born and raised in a suburb of Atlanta, GA. The only thing she loves more than an adventure is a good story about one.

Again, please note: this event had previously been scheduled to take place February 12th at SCADshow. Due to unforeseen circumstances, everyone involved agreed to move the event to Friday, February 8th at the Carter Center. If you have any questions about the change, please do not hesitate to contact A Cappella Books via this website or by calling the store at 404-681-5128. THANKS!