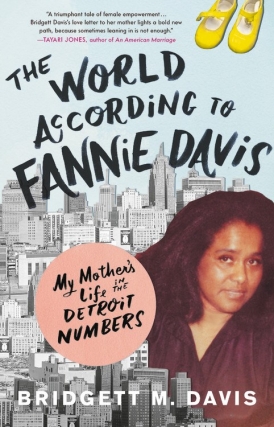 In "The World According to Fannie Davis," Bridgett M. Davis shares a singular memoir that tells the story of one unforgettable mother, her devoted daughter, and the life they lead running the numbers in the Detroit of the 1960s and 1970s.

Davis will be in conversation with Atlanta's own Tayari Jones, New York Times bestselling author of "An American Marriage."

In 1958, the very same year that an unknown songwriter named Berry Gordy borrowed $800 to found Motown Records, a pretty young mother from Nashville, Tennessee borrowed $100 from her brother to run a Numbers racket out of her tattered apartment on Delaware Street, in one of Detroit's worst sections. That woman was Fannie Davis, Bridgett M. Davis' mother.

Part bookie, part banker, mother, wife, granddaughter of slaves, Fannie became more than a numbers runner: she was a kind of Ulysses, guiding both her husbands, five children and a grandson through the decimation of a once-proud city using her wit, style, guts, and even gun. She ran her numbers business for 34 years, doing what it took to survive in a legitimate business that just happened to be illegal. She created a loving, joyful home, sent her children to the best schools, bought them the best clothes, mothered them to the highest standard, and when the tragedy of urban life struck, soldiered on with her stated belief: "Dying is easy. Living takes guts."

A daughter's moving homage to an extraordinary parent, "The World According to Fannie Davis" is also the suspenseful, unforgettable story about the lengths to which a mother will go to "make a way out of no way" to provide a prosperous life for her family -- and how those sacrifices resonate over time. This original, timely, and deeply relatable portrait of one American family is essential reading.

Bridgett M. Davis is Professor of Journalism and the Writing Professions at Baruch College, CUNY, where she teaches creative, film and narrative writing and is Director of the Sidney Harman Writer-in-Residence Program. A graduate of Spelman College in Atlanta, and Columbia University's Graduate School of Journalism, she is the director of the award-winning feature film "Naked Acts," as well as the author of two novels, "Into the Go-Slow" and "Shifting Through Neutral." She lives in Brooklyn, NY with her family.

Tayari Jones is the author of four novels, including "An American Marriage," "Silver Sparrow," "The Untelling," and "Leaving Atlanta." Jones holds degrees from Spelman College, Arizona State University, and the University of Iowa. A winner of numerous literary awards, she is a professor of creative writing at Emory University.

Please note that the nonprofit, non-governmental Carter Center has agreed to take over as the host of Carter Library's author series during the federal government shutdown. Previously scheduled events will move to either the Cecil B. Day Chapel or the Cyprus Room at the Carter Center. Event signs and Carter Center volunteers will be on hand to direct attendees.