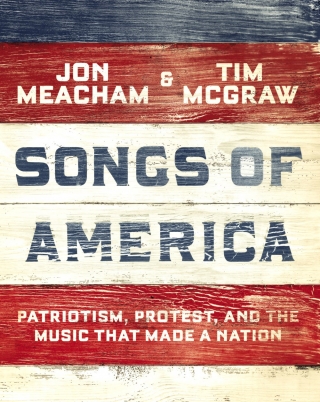 Join Grammy Award-winning Tim McGraw and Pulitzer Prize-winning author Jon Meacham as they explore American history through music. As they publish their new joint book, "Songs of America," Meacham and McGraw will give an intimate, behind-the-scenes look at what went into creating this book and their friendship as they combine their individual perspectives as writer and artist to create a unique view of the role music has played in uniting and shaping our nation.

Republican or Democrat, conservative or liberal, the "Songs of America" Book Tour will be both illuminating and entertaining. To add to the evening, the audience will get some special musical performances of songs from the book by McGraw.

Every ticket includes a copy of "Songs of America: Patriotism, Protest, and the Music That Made a Nation" (a $30 value).

The seven-city tour comes to Atlanta on June 22 at the Coca-Cola Roxy. You must purchase your ticket through the LiveNation website. We do not have tickets for sale at A Cappella.

From “The Star Spangled Banner” to “Born in the U.S.A.,” Jon Meacham and Tim McGraw take us on a journey through the eras and the music that helped to shape a nation. Meacham writes a celebration of the history and songs of the eras, and McGraw reflects on these songs as an artist and performer. Beginning with the battle hymns of the Revolution, and taking us through songs from the defining events of the Civil War, the two World Wars, the Great Depression, the Civil Rights movement, the Vietnam War, into the twenty-first century, Meacham and McGraw explore the songs that defined generations and the cultural and political climates that made them. "Songs of America" remind us where we’ve been, who we are—and what we can be.

Jon Meacham is a Pulitzer Prize-winning biographer. The author of the New York Times bestsellers "Thomas Jefferson: The Art of Power," "American Lion: Andrew Jackson in the White House," "Franklin and Winston", "Destiny and Power: The American Odyssey of George Herbert Walker Bush", and "The Soul of America," Meacham holds the Carolyn T. and Robert M. Rogers Chair in the American Presidency and is a distinguished visiting professor at Vanderbilt University. He is a contributing writer for The New York Times Book Review, and is a fellow of the Society of American Historians. Born in Chatanooga, Meacham now resides in Nashville with his wife and children.

Tim McGraw’s unparalleled career includes 43 number one radio singles, 16 number one albums and countless industry awards and accolades. His unique chart achievements include having three singles in the Top 20 of the radio charts on multiple occasions, as well as having two singles spend over 10 weeks at number one. His last solo project spawned one of the biggest hit singles of all-time, “Humble and Kind,” whose message continues to impact fans around the world including a Spanish version sung by McGraw. He has routinely been cited as one of the biggest touring artists in the history of country music. His latest single, “Thought About You” was the feature televised performance on the NFL Tailgate Party for Super Bowl LIII. McGraw was born in Dehli, Lousiana and now resides with his family in Nashville.