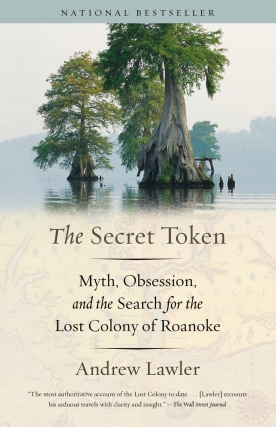 In "The Secret Token," Andrew Lawler pens a sweeping account of America’s oldest unsolved mystery, the people racing to unearth its answer, and the sobering truths—about race, gender, and immigration—exposed by the story of the Lost Colony of Roanoke.

In 1587, 115 men, women, and children arrived at Roanoke Island on the coast of North Carolina. Chartered by Queen Elizabeth I, their colony was to establish England’s first foothold in the New World. But when the colony’s leader, John White, returned to Roanoke from a resupply mission, his settlers were nowhere to be found. They left behind only a single clue—a “secret token” carved into a tree. Neither White nor any other European laid eyes on the colonists again.

What happened to the Lost Colony of Roanoke? For 400 years, that question has consumed historians and amateur sleuths, leading only to dead ends and hoaxes. But after a chance encounter with a British archaeologist, journalist Andrew Lawler discovered that solid answers to the mystery were within reach. He set out to unravel the enigma of the lost settlers, accompanying competing researchers, each hoping to be the first to solve its riddle.

Thrilling and absorbing, "The Secret Token" offers a new understanding not just of the first English settlement in the New World but of how the mystery and significance of its disappearance continues to define and divide our country.

Andrew Lawler is author of two books, "The Secret Token: Myth, Obsession, and the Search for the Lost Colony of Roanoke," a Southern Independent Booksellers Alliance (SIBA) Bestseller, and "Why Did the Chicken Cross the World: The Epic Saga of the Bird that Powers Civilization." As a journalist, he has written more than a thousand newspaper and magazine articles from more than two dozen countries. His byline has appeared in The New York Times, The Washington Post, National Geographic, Smithsonian, and many others. He is contributing writer for Science and contributing editor for Archaeology. Lawler's work has appeared several times in "The Best of Science and Nature Writing." Born in Norfolk, Virginia, Lawler now resides in Asheville, North Carolina.