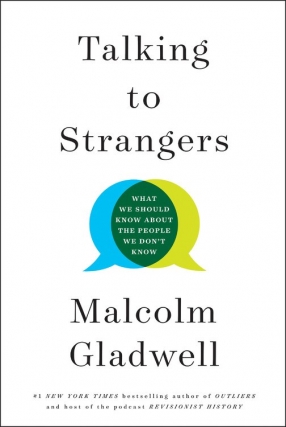 Malcolm Gladwell, host of the podcast "Revisionist History" and the #1 bestselling author of "The Tipping Point," "Blink," and "Outliers," offers a powerful examination of our interactions with strangers—and why they often go wrong.

Gladwell will be in conversation with Virginia Prescott, host of GPB's "On Second Thought," at Georgia Tech's Ferst Center for the Arts.

Tickets are $48 for Orchestra seating and $36 for Mezzanine seating. Each ticket includes a copy of the book with a bookplate signed by the author.

How did Fidel Castro fool the CIA for a generation? Why did Neville Chamberlain think he could trust Adolf Hitler? Why are campus sexual assaults on the rise? Do television sitcoms teach us something about the way we relate to each other that isn't true?

"Talking to Strangers" is a classically Gladwellian intellectual adventure, a challenging and controversial excursion through history, psychology, and scandals taken straight from the news. He revisits the deceptions of Bernie Madoff, the trial of Amanda Knox, the suicide of Sylvia Plath, the Jerry Sandusky pedophilia scandal at Penn State University, and the death of Sandra Bland—throwing our understanding of these and other stories into doubt. Something is very wrong, Gladwell argues, with the tools and strategies we use to make sense of people we don't know. And because we don't know how to talk to strangers, we are inviting conflict and misunderstanding in ways that have a profound effect on our lives and our world. In his first book since his #1 bestseller, "David and Goliath," Malcolm Gladwell has written a gripping guidebook for troubled times.

Malcolm Gladwell is the author of five New York Times bestsellers: "The Tipping Point," "Blink," "Outliers," "What the Dog Saw," and "David and Goliath." He is also the co-founder of Pushkin Industries, an audio content company that produces the podcasts "Revisionist History," which reconsiders things both overlooked and misunderstood, and "Broken Record," where he, Rick Rubin, and Bruce Headlam interview musicians across a wide range of genres. Gladwell has been included in the TIME 100 Most Influential People list and touted as one of Foreign Policy's Top Global Thinkers.