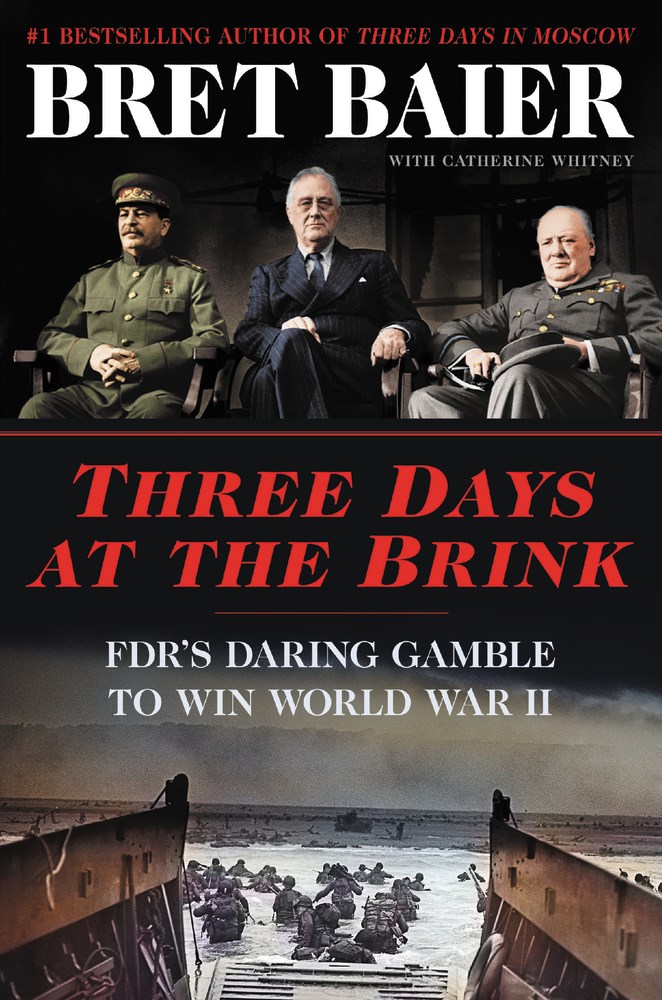 From the #1 bestselling author of "Three Days in Moscow" and anchor of Fox News Channel’s "Special Report with Bret Baier," a gripping history of the secret meeting that won World War II—the now-forgotten 1943 Tehran Conference, where Franklin D. Roosevelt, Winston Churchill, and Joseph Stalin plotted the war’s endgame, including the D-Day invasion. Baier will discuss his latest book, "Three Days at the Brink" at The Carter Center.

This event is free and open to the public. If you are unable to attend, you may pre-order a signed copy of the book here:

November 1943: World War II teetered in the balance. The Nazis controlled nearly all of the European continent, thanks to a seemingly impregnable system of defense nicknamed “fortress Europe.” Japan dominated the Pacific. Allied successes at Sicily and Guadalcanal had gained modest ground but at an extraordinary cost. On the Eastern Front, the Soviets had already lost millions of lives.

With the fate of the world in question, the “Big Three”—Roosevelt, Churchill, and Stalin—secretly met for the first time to chart a strategy for defeating Hitler. Over three days in Tehran, this trio—strange bedfellows united by their mutual responsibility as head of the Allied powers—made essential decisions that would direct the final years of the war and its aftermath.

The three agreed to open a second front in the West, spearheaded by an invasion of France at Normandy the following June. They also discussed what might come after the war, including dividing Germany and establishing the United Nations—plans that set the stage for the postwar world order and the Cold War.

Bret Baier’s historical epic "Three Days at the Brink" centers on these crucial three days in Tehran, the medieval Persian city on the edge of the desert. Baier makes clear the importance of Roosevelt, who stood apart as the sole leader of a democracy, recognizing him as the lead strategist for the globe’s future—the one man who could ultimately allow or deny the others their place in history. With new details found in rarely seen transcripts, oral histories, and declassified State Department and presidential documents from the FDR Library, Baier brings out the complex character of Roosevelt, revealing a man who grew into his role and accepted the greatest calling of the last century.

Interspersing the narratives of these three towering figures against a backdrop of the drama and stakes of World War II, Baier has produced the biggest book yet in his acclaimed "Three Days" series.

Bret Baier is the chief political anchor for Fox News Channel and the anchor and executive editor of "Special Report with Bret Baier." He previously served as the network’s Chief White House Correspondent and as National Security Correspondent based at the Pentagon. He has reported from seventy-four countries, including Iraq (twelve times) and Afghanistan (thirteen times.), and received the National Press Foundation’s 2017 Sol Taishoff Award for Excellence in Broadcast Journalism. He is the author of the New York Times bestsellers "Three Days in Moscow: Ronald Reagan and the Fall of the Soviet Empire"; "Three Days in January: Dwight Eisenhower’s Final Mission"; and "Special Heart: A Journey of Faith, Hope, Courage and Love." He lives with his family in Washington, DC.

Catherine Whitney is a New York Times bestselling coauthor of more than fifty books. She lives in Nyack, New York.