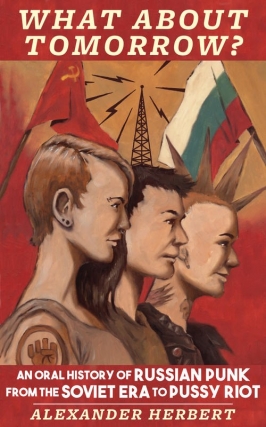 From the Soviet era to Pussy Riot, author Alexander Herbert gives us a gritty look at an embattled dissident subculture in his new book, "What about Tomorrow? An Oral History of Russian Punk." The culmination of years of research, interviews, and travels, "What About Tomorrow?" is the first comprehensive history of punk music and culture in Russia.

Herbert will appear in conversation with music journalist Chad Radford. Opening the evening are Massachusetts musician T. Bloodhound and Atlanta multi-instrumentalist and composer Jeffrey Bützer, who will each perform ahead of the discussion.

Punk arrived in Soviet Russia in 1978, spreading slowly at first through black market vinyl records and soon exploding into state-controlled performance halls, where authorities found the raucous youth movement easier to control. In fits and starts, the scene grew and flourished, always a step ahead of secret police and neo-Nazis, through glasnost, perestroika, and the end of the Cold War. Despite a few albums smuggled out of the country and released in Europe and the US, most Westerners had never heard of Russia's punk movement until Pussy Riot burst onto the international stage. This oral history takes you through four decades of the scene's evolution, from the early bands like Avtomaticheskie Udovletvoriteli ("Automatic Satisfiers," a play on the Sex Pistols) and Naive to more contemporary groups like Distress, Ricochet, and the anti-fascist Proverochnaia Lineika (Straight Edge). From its origins in St. Petersburg and Moscow to uniquely thriving punk scenes in the provincial capitals, this glimpse behind the Iron Curtain feels immediate, real, and more relevant than ever. Includes never-before-published photographs of many of the bands.

Alexander Herbert is a research fellow at Brandeis University, focusing on the history of the late Soviet Union. He is a devoted father, veteran vegan, self-ascribed environmentalist, occasional musician, opportunistic freelance writer and translator, and fan of beet and pickle pizza. Aside from academic research, Alexander has been a punk rock and hardcore enthusiast since the point of contact and has contributed to such iconic fanzines as Maximum Rocknroll and Razorcake. He thoroughly enjoys connecting strangers and has proudly established lines of communication between musicians, writers, and artists in Russia and the United States since 2014. You can read more of Alexander's editorial work and firsthand stories of punk in Russia in Punks Around, a fanzine he edits that prints tales of contributors' experiences in punk scenes around the world.

About the Musical Guests

T. Bloodhound is a songwriter from Attleboro, Massachusetts—lead guitarist for the bands Scalpel and Cactus Attack. His songs are about heartache, isolation, sickness, and medication. If you are wondering about what to do with that light at the end of the tunnel, a threshold dose of the bloodhound might help you find out how to extinguish it.

Although raised by a piano teacher/church organist, Jeffrey Bützer is a self-taught musician/composer. He began playing drums at age nine, then picked up guitar and piano in his teen years and began writing instrumentals. Over the years, accordion, toy piano, electric piano, chord organs, glockenspiel, melodica, banjo and other noise makers have worked their way into his repertoire.