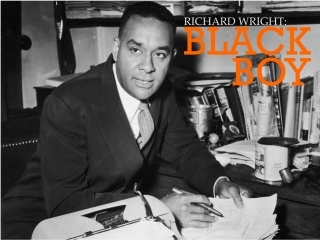 The Baton Foundation, Inc., in partnership with the Auburn Avenue Research Library on African American Culture and History, will host a film screening about the life and work of author Richard Wright.

A Cappella will have many of Wright’s books available for purchase. This program is free and open to the public.

"Richard Wright: Black Boy" is the first documentary film on the life, work and legacy of Richard Wright. Born outside Natchez, Mississippi in 1908, Wright overcame a childhood of poverty and oppression to become one of America’s most influential writers. His first major works, "Native Son" and "Black Boy," were runaway best sellers which are still mainstays of high school and college literature and composition classes.

The film skillfully intercuts dramatic excerpts from Wright’s own work with historical footage and the recollections of friends, associates and scholars such as Ralph Ellison, Margaret Walker, and Wright’s daughter, Julia. They trace Wright’s later development as a writer back to the brutality and racism of his Southern childhood.

Wright played an important role in many of the important social movements of his time. The film follows his journey through the Chicago Black cultural Renaissance of the ’30s, the Communist Party during the Depression, the witch-hunts of the McCarthy era and the American expatriate community in Paris in the ’50s. This biography urges us to take a fresh look at the often-neglected work of Wright’s exile years including "The Long Dream" and his championing of Pan Africanism and the newly emerging nations of Africa and Asia.

By the time of his mysterious death in 1960 at age 52, Wright had left an indelible mark on African American letters, indeed, on the American imagination. This film biography demonstrates Wright’s life-long belief that “words can be weapons against injustice.” It will encourage students of American Literature, Black Studies and 20th Century American History to revisit Wright’s work with fresh enthusiasm and deepened understanding.

NOTE: Limited free parking is available in the lot behind the library. You may secure a parking pass from the library’s concierge desk. Also, recording of any kind is not permitted at Baton Foundation events.