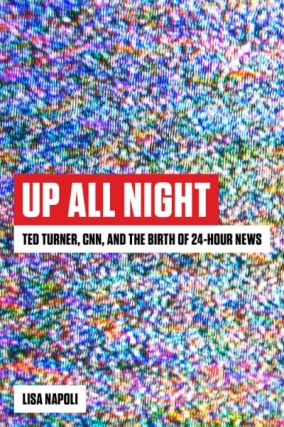 Through her page-turning hybrid of biography, media analysis, and industry history, journalist Lisa Napoli chronicles the thrilling inside story of the birth of CNN and dawn of the age of 24-hour news.

The Atlanta History Center welcomes the author of “Up All Night: Ted Turner, CNN, and the Birth of 24-Hour News” for a virtual discussion with GBP “On Second Thought” host, Virginia Prescott.

A Cappella Books will have copies of "Up All Night," which include a bookplate signed by the author, available after the event. Pre-order via the link below. At checkout, choose between the local delivery, curbside pick-up, or shipping options. For zip codes not listed in the above banner, select curbside pick-up or USPS shipping.

How did we get from an age of dignified nightly news broadcasts on three national networks to the age of 24-hour channels and constantly breaking news? The answer—thanks to Ted Turner and an oddball cast of cable television visionaries, big league rejects, and nonunion newbies—can be found in the basement of an abandoned country club in Atlanta. Because it was there, in the summer of 1980, that this motley crew somehow, against all odds, launched CNN.

Lisa Napoli’s Up All Night is an entertaining inside look at the founding of the upstart network that set out to change the way news was delivered and consumed. Mixing media history, a business adventure story, and great characters, Up All Night tells the story of a network that succeeded beyond even the wildest imaginings of its charismatic and uncontrollable founder, and paved the way for the world we live in today.

Born and raised in Brooklyn, New York, Lisa Napoli began her career as an unpaid teenage intern at CNN’s New York bureau in the summer of 1981. As a journalist, she has worked at the New York Times, Marketplace, MSNBC, and KCRW. She is the author of two previous books, “Radio Shangri-La” and “Ray & Joan.” She lives in Los Angeles.