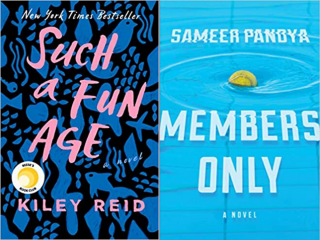 The Decatur Book Festival, A Cappella Books, and the Georgia Center for the Book welcome "Such a Fun Age" author Kiley Reid and "Members Only" author Sameer Pandya, who will discuss their timely and extraordinary debut novels as part of the "Joshilyn Jackson Reads" virtual series.

Reid and Pandya will appear live in conversation with Atlanta's own Joshilyn Jackson, the New York Times bestselling author of "The Almost Sisters" and "Never Have I Ever."

This event is free and open to the public. To attend, click the link below to register for the Crowdcast event:

A Cappella Books will have copies of both titles available after the event. Pre-order via the links below. At checkout, choose between the local delivery, curbside pick-up, or shipping options. For zip codes not listed in the above banner, select curbside pick-up or USPS shipping.

Pre-order “Such a Fun Age”

About “Such a Fun Age”

A striking and surprising debut novel from an exhilarating new voice, “Such a Fun Age” is a page-turning and big-hearted story about race and privilege, set around a young black babysitter, her well-intentioned employer, and a surprising connection that threatens to undo them both.

Alix Chamberlain is a woman who gets what she wants and has made a living, with her confidence-driven brand, showing other women how to do the same. So she is shocked when her babysitter, Emira Tucker, is confronted while watching the Chamberlains' toddler one night, walking the aisles of their local high-end supermarket. The store's security guard, seeing a young black woman out late with a white child, accuses Emira of kidnapping two-year-old Briar. A small crowd gathers, a bystander films everything, and Emira is furious and humiliated. Alix resolves to make things right.

But Emira herself is aimless, broke, and wary of Alix's desire to help. At twenty-five, she is about to lose her health insurance and has no idea what to do with her life. When the video of Emira unearths someone from Alix's past, both women find themselves on a crash course that will upend everything they think they know about themselves, and each other.

With empathy and piercing social commentary, “Such a Fun Age” explores the stickiness of transactional relationships, what it means to make someone "family," and the complicated reality of being a grown up. It is a searing debut for our times.

Kiley Reid earned her MFA from the Iowa Writers’ Workshop, where she was awarded the Truman Capote Fellowship and taught undergraduate creative writing workshops with a focus on race and class. Her short stories have been featured in Ploughshares, December, New South, and Lumina. Reid lives in Philadelphia.

First the white members of Raj Bhatt’s posh tennis club call him racist. Then his life falls apart. Along the way, he wonders: where does he, a brown man, belong in America?

Raj Bhatt is often unsure of where he belongs. Having moved to America from Bombay as a child, he knew few Indian kids. Now middle-aged, he lives mostly happily in California, with a job at a university.  Still, his white wife seems to fit in better than he does at times, especially at their tennis club, a place he’s cautiously come to love.

But it’s there that, in one week, his life unravels. It begins at a meeting for potential new members: Raj thrills to find an African American couple on the list; he dreams of a more diverse club. But in an effort to connect, he makes a racist joke. The committee turns on him, no matter the years of prejudice he’s put up with.  And worse still, he soon finds his job is in jeopardy after a group of students report him as a reverse racist, thanks to his alleged “anti-Western bias.”

Heartfelt, humorous, and hard-hitting, “Members Only” explores what membership and belonging mean, as Raj navigates the complicated space between black and white America.

Sameer Pandya is the author of the story collection “The Blind Writer,” which was longlisted for the PEN/Open Book Award. He is also the recipient of the PEN/Civitella Fellowship. His fiction, commentary, and cultural criticism has appeared in a range of publications, including the Atlantic, Salon, Sports Illustrated, ESPN, and Narrative Magazine. He teaches creative writing and South Asian and Asian American literature at the University of California, Santa Barbara. “Members Only” is his first novel.