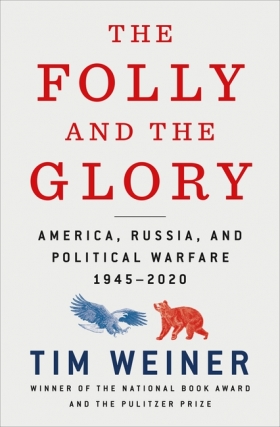 With vivid storytelling and riveting insider accounts, award-winning author and journalist Tim Weiner traces the roots of political warfare – the conflict America and Russia have waged with espionage, sabotage, diplomacy and disinformation – from 1945 until 2020.

The Atlanta History Center welcomes the author for a virtual discussion of his new book, “The Folly and the Glory.” Weiner will appear in conversation with Politico national security correspondent, Natasha Bertrand.

A Cappella Books will have copies of “The Folly and the Glory” available after the event. Pre-order via the link below. At checkout, choose between the local delivery, curbside pick-up, or shipping options. For zip codes not listed in the above banner, select curbside pick-up or USPS shipping.

America won the cold war, but Russia is winning today. Vladimir Putin helped to put his chosen candidate in the White House with a covert campaign that continues to this moment. Putin’s Russia has revived Soviet-era intelligence operations gaining ever more potent information from—and influence over—the American people and government. Yet the US has put little power into its defense. This has put American democracy in peril.

Weiner takes us behind closed doors, illuminating Russian and American intelligence operations and their consequences. To get to the heart of what is at stake and find potential solutions, he examines long-running 20th century CIA operations, the global political machinations of the Soviet KGB around the world, the erosion of American political warfare after the Cold War, and how 21st century Russia has kept the cold war alive. “The Folly and the Glory” is an urgent call to our leaders and citizens to understand the nature of political warfare – and to change course before it’s too late.

Tim Weiner has won the Pulitzer Prize and the National Book Award for his reporting and writing on national security and intelligence. He covered the CIA, the war in Afghanistan, and crises and conflicts in fourteen nations for The New York Times. Weiner has taught history and writing at Princeton and Columbia. “The Folly and the Glory” is his sixth book.