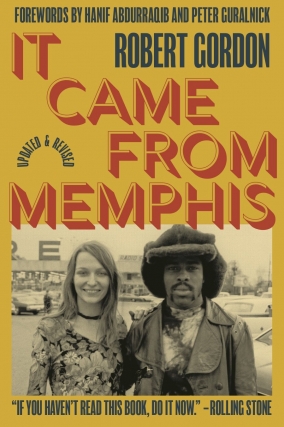 A Cappella Books proudly presents a virtual event with award-winning writer and documentarian Robert Gordon to celebrate the forthcoming 25th Anniversary Edition of his captivating deep-dive into the cultural underground of the 1950s Memphis arts and music scene.

Gordon will join Atlanta music journalist and Smithsonian Folkways editor Chad Radford for a Zoom discussion of the updated and revised “It Came from Memphis,” published by Jack White’s Third Man Books. The interview will be followed by an online Q&A session with our guests.

The updated and revised 25th Anniversary edition of “It Came From Memphis” features more than 80 new photos and a new layout, an updated text featuring more voices, forewords by Peter Guralnick and Hanif Abdurraqib, and buying recommendations from the author.

A Cappella Books will have copies featuring a bookplate signed by Gordon available after the event. Pre-order via the link below. At checkout, choose between the local delivery, curbside pick-up, or shipping options. For zip codes not listed in the above banner, select curbside pick-up or USPS shipping.

Vienna in the 1880s. Paris in the 1920s. Memphis in the 1950s. These are the paradigm shifts of modern culture. Memphis then was like Seattle with grunge or Brooklyn with hip-hop—except the change was more than musical: Underground Memphis embraced black American culture when dominant society simply ignored or abhorred it. The effect rocked the world. Like no other music history, “It Came From Memphis” dishes its tuneful tale with a full context of social issues. From institutional racism to cowboy movies, from manic disc jockeys to Quaalude motorcycle gangs, this story is as unvarnished a history of rock and roll as ever has been written. Stars pass through— Elvis, Aretha, Jerry Lee—but the emphasis is more on the singular achievements of artists like Alex Chilton, Jim Dickinson, Furry Lewis and wrestler Sputnik Monroe. This is a book about the weirdos, winos and midget wrestlers who forged the rock and roll spirit. The Memphis aesthetic is to invert expectations: artists encounter imperfection with a joyous enthusiasm, embracing mistakes and doing it all wrong by forging their own paths to get it exactly right, unwittingly changing the fabric of America. A storyteller’s storyteller, Robert Gordon puts you in the shotgun seat, riding with the old coots and the young rebels as they pass a bottle and a blunt. Memphis changed the world, this book might change you.

Robert Gordon is a writer and a filmmaker, a Grammy winner and an Emmy winner. He’s a native Memphian who has been exporting the city’s authentic weirdness since long before his first book, “It Came From Memphis” (1995). He’s been nominated for six Grammys; his win was for the liner notes to the Big Star box set “Keep an Eye on the Sky.” His Emmy was for “Best of Enemies, the 2015 documentary about Gore Vidal, William Buckley, and the demise of civil discourse in America.” He’s not the rockabilly singer, he’s not author of "Deep Blues," and he’s not the university in Scotland. He lives in Memphis.