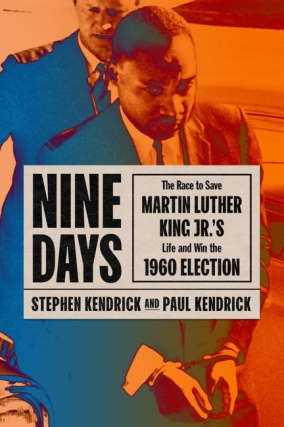 A Cappella Books will have copies of “Nine Days” available after the event. Pre-order via the link below. At checkout, choose between the local delivery, curbside pick-up, or shipping options. For zip codes not listed in the above banner, select curbside pick-up or USPS shipping.

In 1960, the Civil Rights Movement was growing increasingly inventive and energized while white politicians favored the corrosive tactics of silence and stalling—but an audacious team in the Kennedy campaign’s Civil Rights Section (CRS) decided to act. In an election when Black voters seemed poised to split their votes between the candidates, the CRS convinced Kennedy to agitate for King’s release, sometimes even going behind his back in their quest to secure his freedom. Over the course of nine extraordinary October days, the leaders of the CRS—pioneering Black journalist Louis Martin, future Pennsylvania senator Harris Wofford, and Sargent Shriver, the founder of the Peace Corps—worked to tilt a tight election in Kennedy’s favor and bring about a revolution in party affiliation whose consequences are still integral to the practice of politics today.

Based on fresh interviews, newspaper accounts, and extensive archival research, "Nine Days" is the first full recounting of an event that changed the course of one of the closest elections in American history. Much more than a political thriller, it is also the story of the first time King refused bail and came to terms with the dangerous course of his mission to change a nation. At once a story of electoral machinations, moral courage, and, ultimately, the triumph of a future president’s better angels, "Nine Days" is a gripping tale with important lessons for our own time.

Stephen Kendrick is the senior minister of First Church in Boston. Paul Kendrick is a writer whose work has appeared in The New York Times and The Washington Post, among other publications. Executive Director of Rust Belt Rising, an organization training Midwest Democrats on connecting with working families and winning elections and a former director of the Harlem Children's Zone College Success Program, Paul Kendrick also worked in the Obama Administration. They are coauthors of "Douglass and Lincoln: How a Revolutionary Black Leader and a Reluctant Liberator Struggled to End Slavery and Save the Union" and "Sarah’s Long Walk: The Free Blacks of Boston and How Their Struggle for Equality Changed America."

Charles Black is an alumnus of Morehouse College, where he was a chairman of The Atlanta Student Movement. He was one of eight students taught by Dr. Martin Luther King Jr. Charles was part of numerous Atlanta sit-in protests that led to his arrest and jailing. Mr. Black is a veteran actor in various media, Chairman of the Board of Illien Adoptions International, Inc., a member of the board of Freedom University, past Editor of The Atlanta Inquirer Newspaper, Inc. and past CEO of a national consulting firm Frontiers Unlimited, Inc. He regularly mentors younger generations of community and political activists. He was awarded the Presidential Medal of Honor for a Lifetime of Community Service by President Barack Obama in 2016.

Rev. Dr. Otis Moss, Jr. is a theologian, pastor, and one of America’s most influential leaders. A leader in the Atlanta Student Movement, he earned his bachelor’s degree from Morehouse College, his master of divinity degree from Morehouse School of Religion/Inter-denominational Theological Center and his doctor of ministry degree from the United Theological Seminary. In advocating for civil and human rights, he has been jailed in Georgia, Ohio, and Washington, D.C. Dr. Moss served as board member and Regional Director of the SCLC during Dr. King’s tenure as founding president. In 2008, Reverend Moss retired from Olivet Institutional Baptist Church in Cleveland, Ohio after thirty-three years. Prior to this service, he held pastoral positions in churches such as the Providence Baptist Church in Atlanta, GA and as co-pastor with Rev. Martin Luther King, Sr. at Atlanta’s Ebenezer Baptist Church. He also served as national board member and trustee of the Martin Luther King, Jr. Center for Non-violent Social Change. Rev. Moss served as special advisor to former President Carter at Camp David. He is widely identified by Oprah Winfrey as her spiritual mentor. Rev. Moss was inducted into the 2007 Class of the International Civil Rights Walk of Fame and was twice named by Ebony Magazine as one of America’s Greatest Black Preachers. Morehouse College named dormitory suites in honor of Rev. Moss. In 2007 Rev. Moss’s footprints were implanted in the International Walk of Fame in Atlanta in the M.L.K. Jr. Historic District.