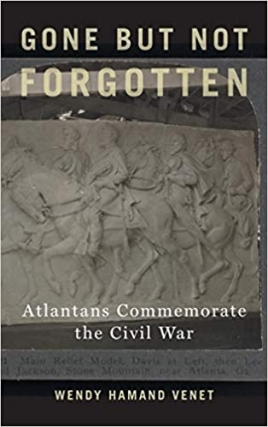 In her new book, Georgia State University history professor Wendy Hamand Venet examines the differing ways that Atlantans have remembered the Civil War since its end in 1865.

The Atlanta History Center welcomes the author for a virtual discussion of “Gone but Not Forgotten: Atlantans Commemorate the Civil War,” on Thursday, March 4, 2021, at 7 PM (EST). Professor Venet will appear in conversation with GBP’s Virginia Prescott.

A Cappella Books will have copies of “Gone but Not Forgotten” available after the event. Pre-order via the link below. At checkout, choose between the local delivery, curbside pick-up, or shipping options. For zip codes not listed in the above banner, select curbside pick-up or USPS shipping.

During the Civil War, Atlanta became the second-most important city in the Confederacy after Richmond, Virginia. Since 1865, Atlanta's civic and business leaders promoted the city's image as a "phoenix city" rising from the ashes of General William T. Sherman's wartime destruction. According to this carefully constructed view, Atlanta honored its Confederate past while moving forward with financial growth and civic progress in the New South. But African Americans challenged this narrative with an alternate one focused on the legacy of slavery, the meaning of freedom, and the pervasive racism of the postwar city. During the civil rights movement in the 1960s, Atlanta's white and black Civil War narratives collided.

Wendy Hamand Venet examines the memorialization of the Civil War in Atlanta and who benefits from the specific narratives that have been constructed around it. She explores veterans' reunions, memoirs and novels, and the complex and ever-changing interpretation of commemorative monuments. Despite its economic success since 1865, Atlanta is a city where the meaning of the Civil War and its iconography continue to be debated and contested.

Wendy Hamand Venet is a professor of history at Georgia State University. She is the author of ”A Changing Wind: Commerce and Conflict in Civil War Atlanta (Georgia),” ”A Strong-Minded Woman: The Life of Mary Livermore,” and ”Neither Ballots nor Bullets: Women Abolitionists and the Civil War,” and the editor of Sam Richards's “Civil War Diary: A Chronicle of the Atlanta Home Front (Georgia).”