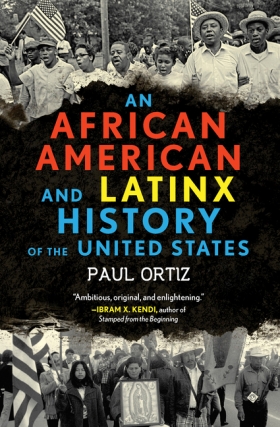 The Baton Foundation, in partnership with the Auburn Avenue Research Library for African American Culture and History, welcomes Professor Paul Ortiz for an online discussion of his book, “An African American and Latinx History of the United States,” on Sunday, April 11, 2021, at 3 PM (EST).

A Cappella Books will have copies of "An African American and Latinx History of the United States" available after the event. Pre-order via the link below. At checkout, choose between the local delivery, curbside pick-up, or shipping options. For zip codes not listed in the above banner, select curbside pick-up or USPS shipping.

Spanning more than two hundred years, "An African American and Latinx History of the United States” is a revolutionary, politically charged narrative history, arguing that the "Global South" was crucial to the development of America as we know it. Scholar and activist Paul Ortiz challenges the notion of westward progress as exalted by widely taught formulations like "manifest destiny" and "Jacksonian democracy," and shows how placing African American, Latinx, and Indigenous voices unapologetically front and center transforms US history into one of the working class organizing against imperialism.

Drawing on rich narratives and primary source documents, Ortiz links racial segregation in the Southwest and the rise and violent fall of a powerful tradition of Mexican labor organizing in the twentieth century, to May 1, 2006, known as International Workers' Day, when migrant laborers--Chicana/os, Afrocubanos, and immigrants from every continent on earth--united in resistance on the first "Day Without Immigrants." As African American civil rights activists fought Jim Crow laws and Mexican labor organizers warred against the suffocating grip of capitalism, Black and Spanish-language newspapers, abolitionists, and Latin American revolutionaries coalesced around movements built between people from the United States and people from Central America and the Caribbean. In stark contrast to the resurgence of "America First" rhetoric, Black and Latinx intellectuals and organizers today have historically urged the United States to build bridges of solidarity with the nations of the Americas.

Incisive and timely, this bottom-up history, told from the interconnected vantage points of Latinx and African Americans, reveals the radically different ways that people of the diaspora have addressed issues still plaguing the United States today, and it offers a way forward in the continued struggle for universal civil rights

Dr. Ortiz is a third-generation military veteran and a first-generation university graduate. His pathway to academia included years of organizing work with the United Farm Workers, the Farm Labor Organizing Committee, AFSCME and many other unions. He is currently president of the United Faculty of Florida-UF (FEA/NEA/AFT/AFL-CIO) the union that represents tenured and non-tenure-track faculty at the University of Florida. In 2013, he received the César E. Chávez Action and Commitment Award from the Florida Education Association, AFL-CIO.

Professor Ortiz received his Ph.D. in history from Duke University in 2000. He earned his bachelor’s degree from the Evergreen State College in 1990 and his Associate of Arts degree from Olympic College in 1988. Currently, Dr. Ortiz is finishing three books. Among them, "People Power: History, Organizing, and Larry Goodwyn’s Democratic Vision in the Twenty-First Century” which will be published by the University Press of Florida in 2021.