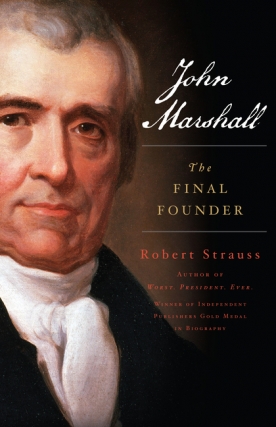 Eighteenth- and 19th-century contemporaries believed John Marshall to be, if not the equal of George Washington and Benjamin Franklin, at least very close to that pantheon. In his new book,  journalist and historian Robert Strauss recounts how the Chief Justice acted as the glue that held the union together after the original founding days.

The Jimmy Carter Presidential Library and A Cappella Books welcome the author for a virtual discussion of “John Marshall: The Final Founder,” on Wednesday, April 7, at 7 PM (EST). Strauss will appear in conversation with Emory Professor of American History, Patrick N. Allitt.

A Cappella Books will have copies of "John Marshall: The Final Founder," available after the event. Pre-order via the link below. At checkout, choose between the local delivery, curbside pick-up, or shipping options. For zip codes not listed in the above banner, select curbside pick-up or USPS shipping.

"John Marshall: The Final Founder” demonstrates that not only can Marshall be considered one of the Founding Fathers, but that what he did as the Chief Justice was significant. The Supreme Court met in the basement of the new Capitol building in Washington when Marshall took over, which is just about what the executive and legislative branches thought of the judiciary.

"John Marshall: The Final Founder” advocates a change in the view of when the “founding” of the United States ended. That has long been thought of in one or the other of the signing of the Constitution, the acceptance of the Bill of Rights or the beginning of the Washington presidency. The Final Founder pushes that forward to the peaceful change of power from Federalist to Democrat-Republican and, especially, Marshall’s singular achievement -- to move the Court from the basement and truly make it Supreme.

Robert Strauss has been a reporter at Sports Illustrated; a feature writer for the Philadelphia Daily News; a news and sports producer for KYW-TV, then the NBC affiliate in Philadelphia, and the TV critic for the Philadelphia Inquirer and Asbury Park Press. For the last two decades, he has been a freelance journalist, his most prominent client being the New York Times, where he has had more than 1000 by-lines. He has taught non-fiction writing at the University of Pennsylvania since 1999 and been an adjunct professor at Temple University, the University of Delaware and St. Joseph’s University as well. He is the author of “Worst. President. Ever.” among other books. He lives in Haddonfield, New Jersey.