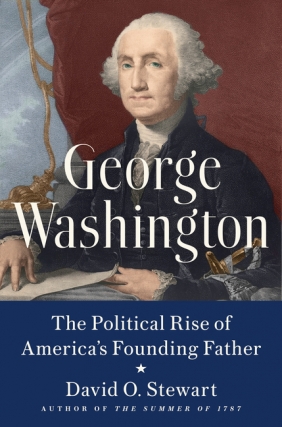 National bestselling historian David O. Stewart presents a fascinating and illuminating account of how our first president became the single most dominant force in the creation of the United States of America.

The Atlanta History Center welcomes the award-winning author for a virtual discussion of his new book,“George Washington: The Political Rise of America's Founding Father,” with Executive Director for Fred W. Smith National Library for the Study of George Washington, Kevin Butterfield, on Wednesday, April 28, at 7 PM (EST).

A Cappella Books has copies of “George Washington” available for purchase. Order via the link below. At checkout, choose between the local delivery, curbside pick-up, or shipping options. For zip codes not listed in the above banner, select curbside pick-up or USPS shipping.

Washington’s rise constitutes one of the greatest self-reinventions in history. In his mid-twenties, this third son of a modest Virginia planter had ruined his own military career thanks to an outrageous ego. But by his mid-forties, that headstrong, unwise young man had evolved into an unassailable leader chosen as the commander in chief of the fledgling Continental Army. By his mid-fifties, he was unanimously elected the nation’s first president. How did Washington emerge from the wilderness to become the central founder of the United States of America?

In this remarkable new portrait, award-winning historian David O. Stewart unveils the political education that made Washington a master politician—and America’s most essential leader. From Virginia’s House of Burgesses, where Washington learned the craft and timing of a practicing politician, to his management of local government as a justice of the Fairfax County Court to his eventual role in the Second Continental Congress and his grueling generalship in the American Revolution, Washington perfected the art of governing and service, earned trust, and built bridges. The lessons in leadership he absorbed along the way would be invaluable during the early years of the republic as he fought to unify the new nation.

David O. Stewart turned to writing after a career practicing law in Washington, DC, defending accused criminals and challenging government actions as unconstitutional. He is a national bestselling and award-winning author of four previous books on American history. He is formerly the president of the Washington Independent Review of Books.