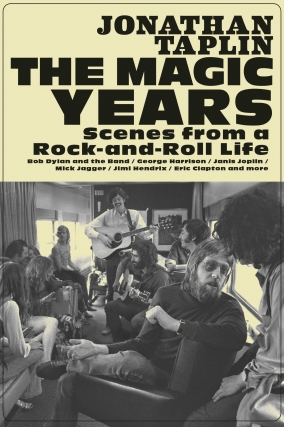 In his new memoir, longtime veteran of the music and film industries and “Move Fast and Break Things,” author Jonathan Taplin chronicles the extraordinary journey which put him at the crest of every significant cultural wave in the past half-century.

A Cappella Books proudly presents Taplin in conversation trailblazing filmmaker, photographer, and author Wim Wenders for a discussion of “The Magic Years: Scenes from a Rock-and-Roll Life” on Sunday, May 9, at 2 PM (EST).

This event is free and open to the public. Register below to ensure your spot.

Pre-order your copy of “The Magic Years” (which will include a bookplate signed by the author) via the link below. At checkout, choose between the local delivery, curbside pick-up, or shipping options. For zip codes not listed in the above banner, select curbside pick-up or USPS shipping.

Jonathan Taplin was tour manager for Bob Dylan and the Band in the ’60s, producer of major films in the ’70s, an executive at Merrill Lynch in the ’80s, creator of the Internet’s first video-on-demand service in the ’90s, and a cultural critic and author writing about technology in the new millennium. His is a lifetime marked not only by good timing but by impeccable instincts—from the folk scene to Woodstock, Hollywood’s rebellious film movement, and beyond. Taplin is not just a witness but a lifelong producer, the right-hand man to some of the greatest talents of both pop culture and the underground.

With cameos by Janis Joplin, Jimi Hendrix, Eric Clapton, Martin Scorsese, and countless other icons, “The Magic Years” is both a rock memoir and a work of cultural criticism from a key player who watched a nation turn from idealism to nihilism. Taplin offers a clear-eyed roadmap of how we got here and makes a convincing case for art’s power to deliver us from “passionless detachment” and rekindle our humanism.

Jonathan Taplin is an author and director emeritus of the USC Annenberg Innovation Lab. Taplin’s book “Move Fast and Break Things: How Facebook, Google, and Amazon Cornered Culture and Undermined Democracy,” published by Little, Brown & Company, was nominated by the Financial Times as one of the Best Business Books of 2017. Taplin has produced music and film for Bob Dylan and the Band, George Harrison, Martin Scorsese, Wim Wenders, Gus Van Sant, and many others. He was the founder of Intertainer, the first streaming video-on-demand platform in 1996.

Taplin graduated from Princeton University. He was a professor at the USC Annenberg School for Communication and Journalism from 2003 to 2016. He is a member of the Academy of Motion Picture Arts and Sciences. He currently sits on the boards of the Authors Guild, the Americana Music Association, and Los Angeles mayor Eric Garcetti’s Technology and Innovation Council. His commentary has appeared in the New York Times, the Washington Post, Time magazine, the Huffington Post, the Guardian, Medium, the Washington Monthly, and The Wall Street Journal.

Wim Wenders (born 1945) is considered one of the pioneers of the New German Cinema of the 1970s and one of the most important representatives of contemporary cinema.

In addition to multi-award-winning feature films, such as “Paris, Texas” (1984) and “Wings of Desire” (1987), he has also created several innovative documentaries such as “Pina,” “Buena Vista Social Club,” “The Salt of the Earth,” and “Pope Francis - A Man of His Word.” Wenders is a director, producer, photographer, and author; his photographic work has been exhibited in museums around the world, and his output includes numerous photo books, film books, and collections of essays.

Wim Wenders and his wife Donata Wenders live in Berlin.