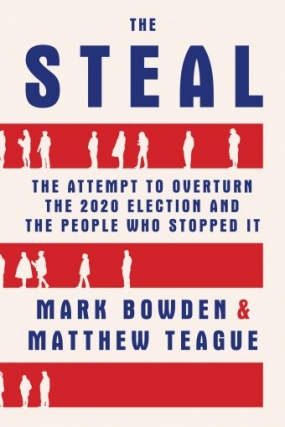 In "The Steal," veteran journalists Mark Bowden and Matthew Teague offer a week-by-week, state-by-state account of the effort to overturn the 2020 presidential election.In the sixty-four days between November 3 and January 6, President Donald Trump and his allies fought to reverse the outcome of the vote. Focusing on six states—Arizona, Georgia, Michigan, Nevada, Pennsylvania, and Wisconsin—Trump's supporters claimed widespread voter fraud. In the weeks after the election, in counties and precincts all over the country, many local Republican officials and even Trump's own campaign workers washed their hands of his increasingly unhinged allegations of fraud. But there was no shortage of people willing to take up the fight. Urged on by Trump and his coterie of advocates, lawyers, and media propagandists, true believers turned on their colleagues, friends, and neighbors—even those in their own party—to accuse them of rigging the election. The real story of the insurrection began months before Trump's mob attacked the US Capitol on January 6, 2021. That riot was the desperate final act, emblematic of the clumsy, failed movement Trump had been building for years. It began in cities and small towns all over America on election day, November 3, 2020.

Working with a team of researchers and reporters, Bowden and Teague uncover never-before-told accounts from the election officials fighting to do their jobs amid outlandish claims and threats to themselves, their colleagues, and their families.

The authors will appear in conversation with Peter Baker, chief White House correspondent for The New York Times, responsible for reporting on President Biden, the fifth president he has covered. He is also the co-author, most recently, of the bestselling book "The Man Who Ran Washington: The Life and Times of James A. Baker II" along with Susan Glasser.

This program will be presented in partnership with Grove Atlantic and Politics & Prose.

Your ticket includes admission to this exclusive event and a hardcover copy of The Steal ($28 retail price), as well as sales tax, shipping, and handling (if applicable). Your login information will arrive via email ahead of the program.

Books may be shipped only to the United States and will be shipped after the event. Please note that USPS is experiencing delays due to the pandemic. Mailed packages may arrive several days later than usual.

Mark Bowden is the author of fifteen books, including the #1 New York Times bestseller "Black Hawk Down." He reported at the Philadelphia Inquirer for twenty years and now writes for The Atlantic and other magazines.

Matthew Teague is a contributor to National Geographic, The Atlantic, Esquire, and other magazines, and executive producer of Our Friend, a feature film that premiered in 2021.