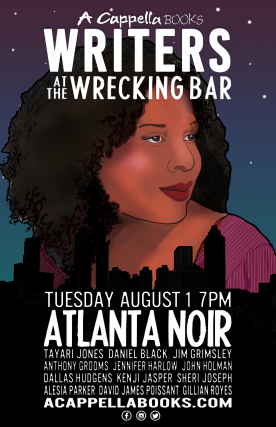 Akashic Books continues its groundbreaking series of original noir anthologies, launched in 2004 with Brooklyn Noir. Each story is set in a distinct neighborhood or location within the city of the book.

Atlanta is one of America’s most dynamic and fastest-growing cities, with an increasingly diverse population. This volume honors the city’s transformation—albeit in a chilling manner—with a highly talented crew of contributors who know the city inside and out.

People who don’t know Atlanta don’t understand the codes and contradictions of the New South. Yes, Margaret Mitchell imagined the plantation Tara within the city limits, but it’s also the home of OutKast. Atlanta has captured the imagination of trash TV with Todd Chrisley’s magnolia-cream accent but also the decidedly urban antics of Love & Hip Hop. The ashes of the Civil War still hang in the air, but immigration is turning the South into the Global South.

With Atlanta Noir, my hope was to find the writers who could show the city in all of its dizzy complexity. These fourteen writers represent the city’s many neighborhoods and demographics—from the Southern punk scene of Little Five Points to the Junior League world of Peachtree City, where things are not always as they seem. There is more going on at the local Waffle House than just scattering, smothering, and chunking. This is a major international city but it’s still the Bible Belt. A megapreacher’s past catches up with him, and gentrification cannot tame the outlaw spirit of the city too busy to hate. Our airport boasts that it is the busiest in the world; locals declare that even on the way to heaven, you have to change planes at Hartsfield-Jackson.  Let us think of Atlanta Noir as an after-hours welcome to the city where we serve our sweet tea with a shot of bourbon.