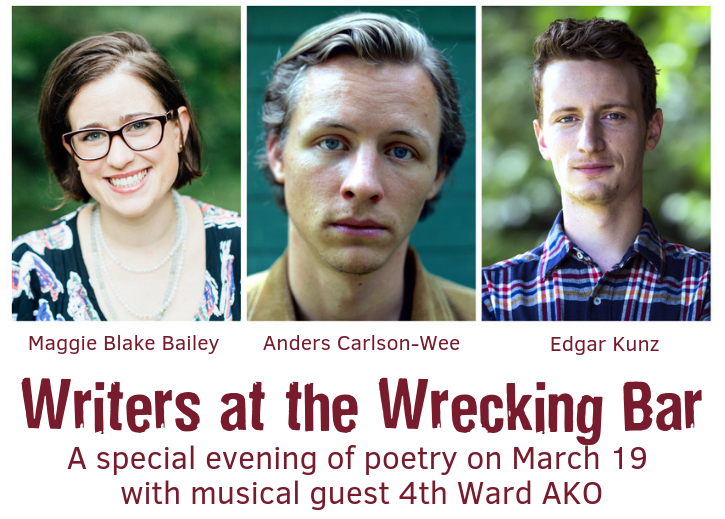 Celebrate the poetry of Atlanta's Maggie Blake Bailey and the debut collections of Anders Carlson-Wee and Edgar Kunz.

Musical guest 4th Ward AKO will kick off the evening's festivities at 7 p.m.

Beginning at 7:30, Bailey, Carlson-Wee, and Kunz will read.

Maggie Blake Bailey has poems published or forthcoming in "The Southern Poetry Anthology, Volume V: Georgia," Tar River, Slipstream, and elsewhere. Her review of Jane Hirshfield’s "Come, Thief" is available now in Flycatcher, and she has been nominated twice for the Pushcart Prize. She is currently engaged in a five-summer MFA program at Sewanee, the University of the South, and during the year, she teaches high school English in Atlanta, Georgia.

Anders Carlson-Wee is the author of "The Low Passions" (W.W. Norton, 2019). His work has appeared in BuzzFeed, Ploughshares, Virginia Quarterly Review, New England Review, Poetry Daily, The Sun, Best New Poets, and The Best American Nonrequired Reading. His debut chapbook, "Dynamite," won the Frost Place Chapbook Prize. The recipient of fellowships from the National Endowment for the Arts, the McKnight Foundation, Bread Loaf, and the Sewanee Writers’ Conference, he is the winner of Ninth Letter’s Poetry Award as well as the 2017 Poetry International Prize. Anders holds an MFA from Vanderbilt University and lives in Minneapolis.

Edgar Kunz is a writer from New England and author of the poetry collection "Tap Out" (Mariner Books / Houghton Mifflin Harcourt). A former Wallace Stegner fellow at Stanford, his work has been supported by fellowships and awards from the National Endowment for the Arts, the Academy of American Poets, the MacDowell Colony, and Vanderbilt University. He lives in Baltimore, where he teaches at Goucher College and in the MFA program at Salve Regina University.

About "The Low Passions"

In a knockout debut collection haunted by shame, violence, and the darkest of our human origins, Anders Carlson-Wee mines nourishment and holiness from our depths.

Explosive and incantatory, "The Low Passions" traces the fringes of the American experiment through the eyes of a young drifter. Pathologically frugal, reckless, and vulnerable, the narrator of these viscerally compelling poems hops freight trains, hitchhikes, dumpster dives, and sleeps in the homes of total strangers, scavenging forgotten and hardscrabble places for tangible forms of faith. A range of strong-willed characters takes shape, amplified by a chorus of monologues from the strangers who shelter him and the family he’s left behind—each made manifest by the poet’s devoted ear and sensitive eye.

Approach these poems as short stories, plainspoken lyric essays, controlled arcs of a bildungsroman, then again as narrative verse. "Tap Out," Edgar Kunz’s debut collection, reckons with his working-poor heritage. Within are poignant, troubling portraits of blue-collar lives, mental health in contemporary America, and what is conveyed and passed on through touch and words violent, or simply absent.

Yet Kunz’s verses are unsentimental, visceral, sprawling between oxys and Bitcoin, crossing the country restlessly. They grapple with the shame and guilt of choosing to leave the culture Kunz was born and raised in, the identity crises caused by class mobility. They pull the reader close, alternating fierce whispers and proud shouts about what working hands are capable of and the different ways a mind and body can leave a life they can no longer endure. This hungry new voice asks: after you make the choice to leave, what is left behind, what can you make of it, and at what cost?