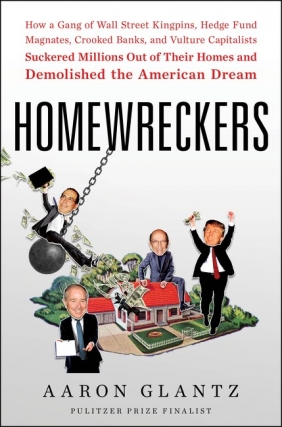 In the spirit of "Evicted," "Bait and Switch," and "The Big Short," a shocking, heart-wrenching investigation into America’s housing crisis and the modern-day robber barons who are making a fortune off the backs of the disenfranchised working and middle class—among them, Donald Trump and his inner circle.

Aaron Glantz, two-time Peabody Award-winning journalist from Reveal, the website, public radio program, podcast and social media platform from The Center for Investigative Reporting, will discuss and sign copies of his new book, "Homewreckers: How a Gang of Wall Street Kingpins, Hedge Fund Magnates, Crooked Banks, and Vulture Capitalists Suckered Millions Out of Their Homes and Demolished the American Dream."

Glantz will appear in conversation with Rose Scott, host of WABE's Closer Look. This event is free and open to the public.

Two years before the housing market collapsed in 2008, Donald Trump looked forward to a crash: “I sort of hope that happens because then people like me would go in and buy,” he said. But our future president wasn’t alone. While millions of Americans suffered financial loss, tycoons pounced to heartlessly seize thousands of homes—their profiteering made even easier because, as prize-winning investigative reporter Aaron Glantz reveals in "Homewreckers," they often used taxpayer money—and the Obama administration’s promise to cover their losses.

In "Homewreckers," Glantz recounts the transformation of straightforward lending into a morass of slivered and combined mortgage “products” that could be bought and sold, accompanied by a shift in priorities and a loosening of regulations and laws that made it good business to lend money to those who wouldn’t be able to repay. Among the men who laughed their way to the bank: Trump cabinet members Steve Mnuchin and Wilbur Ross, Trump pal and confidant Tom Barrack, and billionaire Republican cash cow Steve Schwarzmann. "Homewreckers" also brilliantly weaves together the stories of those most ravaged by the housing crisis. The result is an eye-opening expose of the greed that decimated millions and enriched a gluttonous few.

Aaron Glantz is a senior investigative reporter at Reveal from The Center for Investigative Reporting. His work has been featured in the New York Times, Chicago Tribune, "NBC Nightly News," "Good Morning America," and "PBS NewsHour." The recipient of a Peabody Award, and numerous Emmy nominations, and in 2018, his reporting on the housing and banking industries was honored with a DuPont Award. Glantz’s previous books include "How America Lost," "The War Comes Home," and "Winter Soldier Iraq and Afghanistan," which he coauthored with Iraq Veterans Against the War. He lives in San Francisco, California.