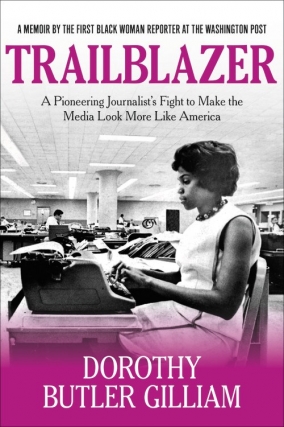 Dorothy Butler Gilliam, whose 50-year-career as a journalist put her in the forefront of the fight for social justice, offers a comprehensive view of racial relations and the media in the U.S.

Most civil rights victories are achieved behind the scenes, and this riveting, beautifully written memoir by the first black woman reporter for The Washington Post looks back with searing insight on the decades of struggle, friendship, courage, humor and savvy that secured what seems commonplace today-people of color working in mainstream media.

Told with a pioneering newspaper writer's charm and skill, Gilliam's full, fascinating life weaves her personal and professional experiences and media history into an engrossing tapestry. When we read about the death of her father and other formative events of her life, we glimpse the crippling impact of the segregated South before the civil rights movement when slavery's legacy still felt astonishingly close. We root for her as a wife, mother, and ambitious professional as she seizes once-in-a-lifetime opportunities never meant for a "dark-skinned woman" and builds a distinguished career. We gain a comprehensive view of how the media, especially newspapers, affected the movement for equal rights in this country. And in this humble, moving memoir, we see how an innovative and respected journalist and working mother helped provide opportunities for others.

With the distinct voice of one who has worked for and witnessed immense progress and overcome heart-wrenching setbacks, this book covers a wide swath of media history -- from the era of game-changing Negro newspapers like The Chicago Defender to the civil rights movement, feminism, and our current imperfect diversity. This timely memoir, which reflects the tradition of boot-strapping African American storytelling from the South, is a smart, contemporary consideration of the media.

Dorothy Butler Gilliam has been a journalist for more than six decades. In 1961, she became the first black woman reporter for The Washington Post. She would later become an editor and a columnist for the paper before retiring in 2003. Throughout her career, she has worked tirelessly to nurture other journalists of color and to diversify newsrooms across the United States. Her work as a civil rights journalist has been featured in three documentaries: "Freedom's Call," "Southern Journalists Who Covered the Civil Rights Movement," and "Hope & Fury: MLK, The Movement and The Media." During her career, Ms. Gilliam appeared regularly on television, including PBS, and hosted her own show on BET. She formerly served as president of the National Association of Black Journalists and of the Unity Journalists of Color.