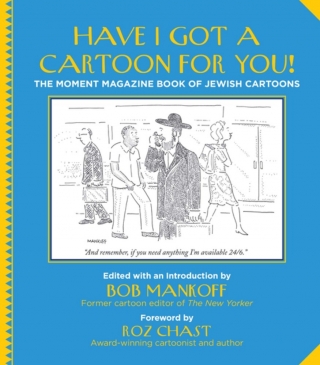 Bob Mankoff wowed book festival audiences with his memoir, "How About Never…Is Never Good for You?" He returns to the Book Festival of the MJCCA stage with his latest book, a curated collection of his favorite Jewish cartoons. In his foreword to this entertaining collection, Mankoff shows how his Jewish heritage helped him to become a successful cartoonist, examines the place of cartoons in the vibrant history of Jewish humor, and plumbs Jewish thought, wisdom, and schtick for humorous insights.

Bob Mankoff grew up Jewish in Queens, NY in the 1950s and 1960s. As a kid, he visited the Borscht Belt and reveled in the hilarious performances of some of the best Jewish comedians such as Jerry Lewis, Buddy Hackett, and Rodney Dangerfield, among others. These early experiences helped shape Mankoff’s view of life and led him to become a creative master practitioner of humor and cartoons. He started his career unexpectedly by quitting a Ph.D. program in experimental psychology at The City University of New York in 1974 and submitting his cartoons to the New Yorker. Three years and over 2,000 cartoons later, he finally made the magazine and has since published over 950 cartoons. He has devoted his life to discovering just what makes us laugh and seeks every outlet to do so, from developing The New Yorker’s web presence to founding The Cartoon Bank, a business devoted to licensing cartoons for use in newsletters, textbooks, magazines and other media. In this new book, "Have I Got a Cartoon for You!" this successful cartoonist, speaker and author, presents his favorite Jewish cartoons.

Mankoff examines the place of cartoons in the vibrant history of Jewish humor, and plumbs Jewish thought, wisdom and shtik for humorous insights. Mankoff has written: “I always think that it’s strange that the Jews, The People of the Book, eventually became much better known as The People of the Joke. Strange because laughter in the Old Testament is not a good thing: When God laughs, you’re toast. If you say, ‘Stop me if you’ve heard this one,’ he does for good.”

A major influence on his cartoons about religion derives from Jewish culture’s disputatiousness, the questioning everything just for the hell of it and then the questioning of the questioning to be even more annoying. He recalls: “When, I was first dating my wife, who is not Jewish, we once were having what I thought was an ordinary conversation and she said, ‘Why are you arguing with me?’ I replied, ‘I’m not arguing, I’m Jewish.’ I thought that was clever. She didn’t. Some humor scholars claim this stems from the practice in the Talmud of pilpul, which Leo Rosten has described as ‘unproductive hair-splitting that is employed not so much to radiate clarity ... as to display one’s own cleverness.’ I go along with that except I like to think that some clarity and cleverness are not mutually exclusive. Anyway, that’s my aim in cartoons like these. Now, am I worried that these jokes will bring His wrath down upon me down with a bolt from the blue. Not really, but every time there’s a thunderstorm, I hide in the cellar.”

Bob Mankoff, Cartoon and Humor Editor for Esquire and former New Yorker Cartoon Editor, his story and day-to-day at the magazine were the focus of the 2015 HBO documentary "Very Semi-Serious." In addition to appearances on "60 Minutes" and "Charlie Rose," Mankoff was the host of the New Yorker web series "The Cartoon Lounge." In 2014 he published his New York Times bestselling memoir "How About Never - Is Never Good For You?: My Life In Cartoons." Most recently, he edited the massive two-volume "The New Yorker Encyclopedia of Cartoons: A Semi-serious A-to-Z Archive."