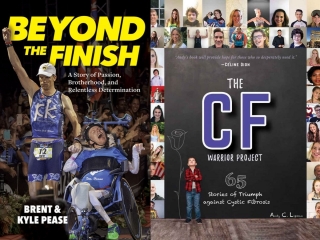 Iron Brothers Brent Pease and Kyle Pease and CF Warrior Andy Lipman discuss their real-life tales of triumph during this 28th Edition of the Book Festival of the MJCCA event.

About Brent Pease and Kyle Pease and "Beyond the Finish"

A four-time IRONMAN triathlete, Kyle Pease has a career total of more than 75 races. Since 2011, he and his brother Brent have competed in races across the country, most recently becoming the first brother duo in history to complete the grueling IRONMAN World Championship in Kona, Hawaii. Born with Cerebral Palsy, Kyle has strived for a life beyond his wheelchair. Through his work with The Kyle Pease Foundation, he advocates for inclusivity in the sports world for athletes with disabilities. A motivational speaker and greeter at Piedmont Hospital in Atlanta, Kyle graduated from Kennesaw State University with a B.S. in sports management.

Brent began his road to fitness in 2007 by training for a 10K. He went on to complete his first IRONMAN triathlon in 2010, and has not slowed down since. He has finished more than one hundred races, including ten IRONMANs, several 70.3 Half IRONMAN competitions, and Olympic distance events. Off the course, Brent is a multi-sport coach with Dynamo Multisport, as well as the executive director of The Kyle Pease Foundation. A graduate of Florida State University, Brent resides in Atlanta with his wife and two kids.

The Pease brothers have completed more than 75 races together since 2011, including four IRONMAN triathlons and countless other endurance races. In October 2018, the brothers made history as the first brother duo to complete the IRONMAN World Championship in Kona, Hawaii. Together they empower athletes with disabilities to compete in the multi-sport and endurance world through their nonprofit organization. The Kyle Pease Foundation promotes success for young persons with disabilities by providing assistance to meet their individual needs through sports and competition. Since its inception, it has championed more than one hundred athletes across sixty events. Through speaking engagements, the Pease brothers share their message of inclusion and help to define what is truly possible.

“For the most part, my childhood was much like that of so many of my peers. I tried to get in trouble on occasion, but other than that I got to share some incredible experiences along the way. Never would you guess I spent my days confined to a wheelchair. Much of what I learned helped shape where I wanted to be when I grew up. Growing up Peasey was a blessing and makes me proud of how I’ve grown and continue to grow to this day.”

Diagnosed with cerebral palsy as a child, Kyle Pease had grown up supporting his athlete brothers Brent and Evan from the sidelines. While his condition limited his ability to play sports, it didn’t dampen Kyle’s passion for them, nor did it stop the Pease family from including Kyle in various excursions. From rolling his wheelchair up Bridal Veil Falls in Yosemite National Park to zipping down Colorado snow slopes, there was never a dull moment with the Pease brothers. Where there was a wheel, there was a way to adventure.

Upon witnessing Brent complete his first IRONMAN competition, Kyle asked Brent a life-changing question: “Can people in wheelchairs do IRONMAN?” Brent never hesitated with his response. The answer was a resounding yes. Learning from others and through their own hard work, the brothers competed in IRONMAN competitions around the country and were ultimately awarded the opportunity to participate in the IRONMAN World Championship in Kona, Hawaii. In this memoir that interweaves both their perspectives, Kyle and Brent recount the experiences that shaped the strength, tenacity, and undying bond that has resonated between them since childhood.

Andy Lipman was born in Atlanta, Georgia. He has cystic fibrosis (CF) and his four books all have cystic fibrosis themes including his latest "The CF Warrior Project" which details the lives of people with CF.

Not just relating stories of survivors, Andy is also dedicated to finding a cure for this invisible, terminal disease. He and his family founded the Wish for Wendy Foundation in memory of his older sister, who died from CF after only 16 days of life. As of 2019, the foundation has contributed more than $4,000,000 to help raise awareness for cystic fibrosis and fund research for a cure. Andy is currently a member of the Alumni Board for the Adult Advisory Council and the chairman of the National Fundraising Committee for the National Cystic Fibrosis Foundation and in 2016 was presented with the prestigious Alex Award in memory of the late Alex Deford.

Andy was chosen as the finale conference speaker of the Birth Defects and Developmental Disabilities Center at the Centers for Disease Control and Prevention shortly after being certified as a Toastmaster speaker. Andy has spoken at CF organizations from California all the way to Ireland in addition to sharing his story with local business, schools, and civic organizations.

Andy has run the 10-kilometer Peachtree Road Race every year since 1997. He also runs and adheres to a rigorous daily workout and medical treatment routine. He has also finished a triathlon and completed the difficult ninety-day workout program P90X. An even greater achievement occurred in 2006 when Lipman became a father, a miracle for any male with cystic fibrosis because they are nearly all infertile. The Lipman’s second child, also conceived with the help of IVF, was born in 2008.

Andy holds a degree in Business Administration from the University of Georgia and serves on its Terry College of Business emeritus board of directors and has served on the board in some facet since 2012.

Andy currently lives in Atlanta, Ga., with his wife Andrea and their daughter Avery and son Ethan.

"The CF Warrior Project" is more than a book. It’s a movement.

Living with cystic fibrosis requires fighting for every breath and working hard to survive as normally as possible. CF Warriors are not guaranteed a normal lifespan and having cystic fibrosis requires a passion for every moment on this earth, a daily determination to maintain health, and courage for striving to do things most of us take for granted.

Author and founder of the CF Warrior Project, Andy Lipman, does not just relate to stories of CF survivors. He is dedicated to finding a cure for this genetic disease. He and his family founded the Wish for Wendy Foundation in memory of his older sister, who died from CF only 16 days after she was born. As of 2019, the foundation has raised more than $4 million for cystic fibrosis research.

The CF Warrior Project book shares the experiences of people who conquered Mount Everest; became a circus acrobat; received a lung transplant and ran a marathon a year later; and secured approval of breakthrough CF drugs. These people, from teenagers to septuagenarians, have accomplished amazing things. Each story has its own merits, but the common theme among them is how these CF Warriors maintain positive attitudes all while having a significant impact on the world, despite the challenges of their life-threatening genetic disorder.

The CF Warrior Project strives to empower those with CF and give them the strength to keep fighting, breathing, and supporting research for a cure to end cystic fibrosis. We want to share this project as a voice of hope and a reminder to CF Warriors that life is there for the taking!