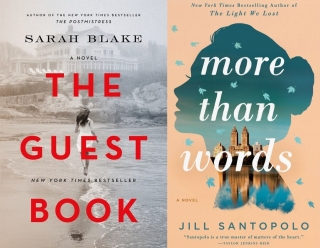 Two novels about past mistakes and betrayals, family legacies, and self-discovery highlight this MJCCA Book Festival event. Bestselling authors Sarah Blake and Jill Santopolo will be in conversation with Alison Law, host of the "Literary Atlanta" podcast.

About Sarah Blake and "The Guest Book"

Sarah Blake is the author of the novels "Grange House" and the New York Times bestseller "The Postmistress." She lives in Washington, D.C., with her husband and two sons.

"The Guest Book" follows three generations of a powerful American family, a family that “used to run the world.”

And when the novel begins in 1935, they still do. Kitty and Ogden Milton appear to have everything—perfect children, good looks, a love everyone envies. But after a tragedy befalls them, Ogden tries to bring Kitty back to life by purchasing an island in Maine. That island, and its house, come to define and burnish the Milton family, year after year after year. And it is there that Kitty issues a refusal that will haunt her till the day she dies.

In 1959 a young Jewish man, Len Levy, will get a job in Ogden’s bank and earn the admiration of Ogden and one of his daughters, but the scorn of everyone else. Len’s best friend, Reg Pauling, has always been the only black man in the room—at Harvard, at work, and finally at the Miltons’ island in Maine.

An island that, at the dawn of the twenty-first century, this last generation doesn’t have the money to keep. When Kitty’s granddaughter hears that she and her cousins might be forced to sell it, and when her husband brings back disturbing evidence about her grandfather’s past, she realizes she is on the verge of finally understanding the silences that seemed to hover just below the surface of her family all her life.

About Jill Santopolo and "More Than Words"

Jill Santopolo received a BA in English literature from Columbia University and an MFA in writing from the Vermont College of Fine Arts. She’s the author of three successful children’s and young-adult series and works as the Associate Publisher of Philomel Books, an imprint of Penguin Young Readers Group. Santopolo travels the world to speak about writing and storytelling. She is the author of "The Light We Lost," a national and international bestseller that has been translated into more than thirty languages. "More Than Words" is her second novel for adults. She lives in New York City.

Nina has always known who she’s supposed to be. But is that who she truly is?

Nina Gregory has always been a good daughter. Raised by her father, owner of New York City’s glamorous Gregory Hotels, Nina was taught that family, reputation, and legacy are what matter most. And Tim—her devoted boyfriend and best friend since childhood—feels the same. But when Nina’s father dies, he leaves behind a secret that shocks Nina to her core.

As her world falls apart, Nina begins to see the men in her life—her father, her boyfriend, and unexpectedly, her boss, Rafael—in a new light. Soon Nina finds herself caught between the world she loves, and a passion that could upend everything.

"More Than Words" is a heartbreaking and romantic novel about grief, loss, love, and self-discovery, and how we choose which life we are meant to live.