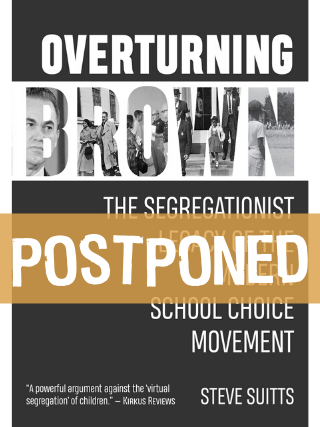 This event is free and open to the public. Reserve your seat by pre-ordering a copy of "Overturning Brown" from A Cappella.

School choice, widely touted as a system that would ensure underprivileged youth have an equal opportunity in education, has grown in popularity in the past fifteen years. The strategies and rhetoric of school choice, however, resemble those of segregationists who closed public schools and funded private institutions to block African American students from integrating with their white peers in the wake of the 1954 U.S. Supreme Court’s Brown v. Board of Education decision.

“Overturning Brown” exposes the dangers lying behind the smoke and mirrors of the so-called civil rights policies of Betsy DeVos and the education privatization lobbies. Economic and educational disparities have expanded rather than contracted in the years following Brown, and post-Jim Crow discriminatory policies drive inequality and poverty today. Suitts deftly reveals the risk that America and its underprivileged youth face as school voucher programs funnel public funds into predominantly white and often wealthy private schools and charter schools.

Steve Suitts is an adjunct at the Institute for Liberal Arts of Emory University, a position he has held for the last twenty years and has been chief strategist for Better Schools Better Jobs, a Mississippi-based education advocacy project of the New Venture Fund. Suitts began his career as a staff member of the Selma Project. He was founding director of the Alabama Civil Liberties Union, a post he held for five years; the executive director of the Southern Regional Council for eighteen years; and program coordinator, vice president, and senior fellow of the Southern Education Foundation for nearly twenty years. He is the author of “Hugo Black of Alabama: How His Roots and Early Career Shaped the Great Champion of the Constitution” and was the executive producer and one of the writers of “Will the Circle Be Unbroken,” a thirteen-hour public radio series that received a Peabody Award for its history of the Southern civil rights movement.