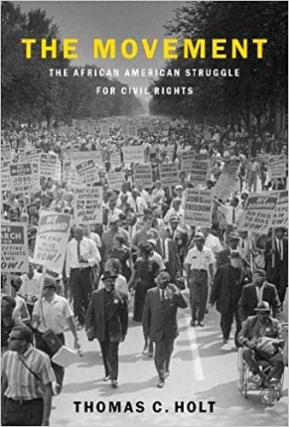 The Atlanta History Center welcomes historian, professor and author Thomas C. Holt for a virtual discussion of his new book, "The Movement: The African American Struggle for Civil Rights," on Thursday, February 18, 2021, at 7 PM (EST). The author will appear in conversation with GBP’s Virginia Prescott.

A Cappella Books will have copies of "The Movement" available after the event. Pre-order via the link below. At checkout, choose between the local delivery, curbside pick-up, or shipping options. For zip codes not listed in the above banner, select curbside pick-up or USPS shipping.

The civil rights movement was among the most important historical developments of the twentieth century and one of the most remarkable mass movements in American history. Not only did it decisively change the legal and political status of African Americans, but it prefigured as well the moral premises and methods of struggle for other historically oppressed groups seeking equal standing in American society. And, yet, despite a vague, sometimes begrudging recognition of its immense import, more often than not the movement has been misrepresented and misunderstood. For the general public, a singular moment, frozen in time at the Lincoln Memorial, sums up much of what Americans know about that remarkable decade of struggle.

In "The Movement," Thomas C. Holt provides an informed and nuanced understanding of the origins, character, and objectives of the mid-twentieth-century freedom struggle, privileging the aspirations and initiatives of the ordinary, grassroots people who made it. Holt conveys a sense of these developments as a social movement, one that shaped its participants even as they shaped it. He emphasizes the conditions of possibility that enabled the heroic initiatives of the common folk over those of their more celebrated leaders. This groundbreaking book reinserts the critical concept of "movement" back into our image and understanding of the civil rights movement.

Thomas C. Holt is James Westfall Thompson Professor Emeritus of American and African American History at the University of Chicago and the author of "Children of Fire: A History of African Americans" and "The Problem of Race in the Twenty-First Century."