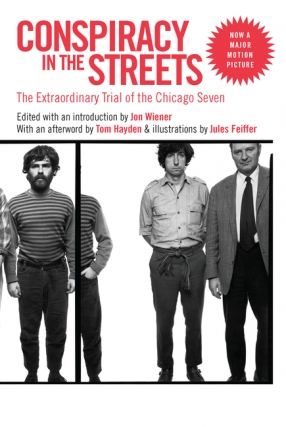 Join SURJ (Showing Up for Racial Justice) Atlanta and A Cappella Books for a virtual author discussion with historian Jon Wiener, author of “Conspiracy in the Streets.”

Reprinted to coincide with the release of the acclaimed new Netflix film directed by Aaron Sorkin, “The Trial of the Chicago 7,” the book provides the political background of this infamous trial, narrating the utter craziness of the courtroom and revealing both the humorous antics and the serious politics involved.

Wiener will appear in conversation with Atlanta-born Robert Penn Warren Professor of the Humanities, Colin Dayan, via Zoom on Thursday, February 18, 2021, at 8 PM (EST).

A Cappella Books will have copies of "Conspiracy in the Streets" available after the event. Pre-order via the link below. At checkout, choose between the local delivery, curbside pick-up, or shipping options. For zip codes not listed in the above banner, select curbside pick-up or USPS shipping.

Opening at the end of 1969--a politically charged year at the beginning of Nixon's presidency and at the height of the anti-war movement--the Trial of the Chicago Seven (which started out as the Chicago Eight) brought together Yippies, antiwar activists, and Black Panthers to face conspiracy charges following massive protests at the 1968 Democratic National Convention in Chicago, protests which continue to have remarkable contemporary resonance.

The defendants--Rennie Davis, Dave Dellinger, John Froines, Tom Hayden, Abbie Hoffman, Jerry Rubin, Bobby Seale (the co-founder of the Black Panther Party who was ultimately removed from the trial, making it seven and not eight who were on trial), and Lee Weiner--openly lampooned the proceedings, blowing kisses to the jury, wearing their own judicial robes, and bringing a Viet Cong flag into the courtroom. Eventually the judge ordered Seale to be bound and gagged for insisting on representing himself. Adding to the theater in the courtroom an array of celebrity witnesses appeared, among them Timothy Leary, Norman Mailer, Arlo Guthrie, Judy Collins, and Allen Ginsberg (who provoked the prosecution by chanting "Om" on the witness stand).

This book combines an abridged transcript of the trial with astute commentary by historian and journalist Jon Wiener, and brings to vivid life an extraordinary event which, like Woodstock, came to epitomize the late 1960s and the cause for free speech and the right to protest--causes that are very much alive a half century later. As Wiener writes, "At the end of the sixties, it seemed that all the conflicts in America were distilled and then acted out in the courtroom of the Chicago Conspiracy trial."

An afterword by the late Tom Hayden examines the trial's ongoing relevance, and drawings by Jules Feiffer help recreate the electrifying atmosphere of the courtroom.

Jon Wiener started out in the sixties writing for The Old Mole, an underground weekly in Cambridge, Mass. He sued the FBI for their files on John Lennon - dating from the time when Nixon had ordered Lennon deported from the US to silence him as a critic of the Vietnam War. After 17 years of litigation, including a Supreme Court appeal (Wiener v FBI, cert denied), the government settled and released almost all of pages that had been withheld on the grounds that they contained "National Security" information. That story is told in his book "Gimme Some Truth: The John Lennon FBI Files."

He lives in Los Angeles with his wife, the video artist and photographer Judy Fiskin.