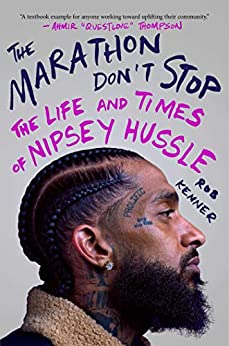 Location:
Georgia Center for the Book on Zoom

From the founding editor of Vibe Magazine comes the first in-depth biography of Nipsey Hussle, the hip hop mogul, artist, and activist whose transformative legacy inspired a generation with his motivational lyrics and visionary business savvy—before he was tragically shot down in the very neighborhood he was dedicated to building up.

Georgia Center for the Book welcomes author Rob Kenner, who will discuss his new book “The Marathon Don't Stop: The Life and Times of Nipsey Hussle” on Monday, March 22, at 7 PM (EST). For this panel discussion, Kenner will be joined by  Atlanta-based music and culture writer, Christina Lee and Dr. Regina Bradley, author of “Chronicling Stankonia: The Rise of the Hip-Hop South,” and editor of the upcoming, “An OutKast Reader: Essays on Race, Gender, and the Postmodern South.”

This virtual event is free and open to the public, but you must register on Eventbrite via the link below to gain access to the Zoom webinar.

A Cappella Books will have copies of “The Marathon Don't Stop,” “Chronicling Stankonia,” and "An Outkast Reader” available after the event. Pre-order via the links below. At checkout, choose between the local delivery, curbside pick-up, or shipping options. For zip codes not listed in the above banner, select curbside pick-up or USPS shipping.

In the ten years since he first met Nipsey Hussle in the offices of Vibe, journalist Rob Kenner followed Hussle’s career, paying close attention to the music and business movement he was building in Los Angeles. Ten years later, they spoke again. To Kenner, it became clear that Hussle had been underestimated his entire life—not just for his artistry but also for his intellect and intentions.

For Nipsey Hussle, “The Marathon” was more than a mixtape title or the name of a clothing store; it was a way of life, a metaphor for the relentless pursuit of excellence and the willpower required to overcome adversity day after day. Hussle was determined to win the race to success on his own terms, and he wanted to see his whole community in the winner’s circle with him.

Combining on-the-ground reporting and candid interviews with Hussle’s friends, family, and peers, “The Marathon Don’t Stop” traces the life and work of an extraordinary artist, placing him in historical context and unpacking his complex legacy. For the first time ever, members of his inner circle will speak about the man they knew and his determination to maintain integrity amidst the treacherous extremes of street life and the rap game.

“The Marathon Don’t Stop” is a journalistic account of Nipsey Hussle’s life and times, making sense of the forces that shaped a singular figure in hip hop culture.

Rob Kenner is one of the most prolific and influential voices in hip hop publishing. A founding editor of Vibe, Kenner joined the start-up team of Quincy Jones’ groundbreaking hip hop monthly in 1992. During a nineteen-year run at Vibe he edited and wrote cover and feature stories on iconic cultural figures ranging from Tupac Shakur to Barack Obama as well as writing the acclaimed column Boomshots. Kenner’s writing has appeared in Complex, Genius, Mass Appeal, Pigeons & Planes, Ego Trip, Poetry magazine, The New York Times, and Billboard. He’s also produced and directed documentary shorts on the likes of De La Soul, Nas, and Post Malone. As an editor at Vibe Books, Kenner worked on the New York Times bestseller "Tupac Shakur" and contributed to "The Vibe History of Hip Hop." He went on to co-author VX: 10 Years of Vibe Photography and produced the book “Unbelievable,” a biography of The Notorious B.I.G. by Cheo Hodari Coker Jr., which was optioned for the motion picture “Notorious.”

Dr. Regina N. Bradley is a writer and researcher of African American Life and Culture with an emphasis on the contemporary American South. She is an alumna Nasir Jones HipHop Fellow (Harvard University, Spring 2016) and is the Assistant Professor of English and African Diaspora Studies at Kennesaw State University in Kennesaw, GA. Her expertise and research interests include 20th and 21st Century African American Literature, hip hop culture, race and the contemporary U.S. South, and sound studies. She is the author of the book “Chronicling Stankonia: the Rise of the Hip Hop South.” "Chronicling Stankonia" explores how Atlanta, GA hip hop duo OutKast and southern hip hop influences renderings of the Black American South after the formally organized Civil Rights Movement. Dr. Bradley is also the editor of the forthcoming collection of essays on OutKast, "An OutKast Reader," for UGA Press. Dr. Bradley is the founder and host of OutKasted Conversations, a critically acclaimed dialogue series dedicated to thinking about the cultural and academic implications of the hip hop group OutKast. Her scholarship on popular culture and race is published in south: a scholarly journal, Black Camera, Meridians, Comedy Studies, ADA, Journal of Ethnic American Literature, Palimpsest, and Current Musicology. Additionally, Dr. Bradley's commentary is featured on a range of news media outlets including Washington Post, NPR, NewsOne, SoundingOut!,  and Creative Loafing Atlanta. In May 2017 Dr. Bradley delivered a TEDx talk, "The Mountaintop Ain't Flat," about the significance of hip hop in bridging the American Black South to the present and future. In May 2019, Dr. Bradley, along with music and culture journalist Christina Lee, started hosting the southern hip hop podcast "Bottom of the Map" for WABE (NPR Atlanta) and PRX. "Bottom of the Map" boasts being featured as “New and Noteworthy” on Apple Podcast and being named the 2019 "Best New Local Podcast" by Atlanta Magazine. As a complement to her scholarly work, Dr. Bradley is a critically acclaimed fiction writer.  Her fiction has been supported by Callaloo Creative Writing Workshop and Tin House Summer Workshop. Dr. Bradley's short story, "Beautiful Ones," was  a 2017 Pushcart Prize nominee. Her first short story collection, "Boondock Kollage: Stories from the Hip Hop South," was published in April 2017. Dr. Bradley's fiction is also featured in BOAAT, Transition, Obsidian, Sycorax's Daughters, and Oxford American.

Christina Lee is a freelance music and culture journalist whose work has appeared in Billboard, The Guardian, Pitchfork, The Washington Post and other publications. She is a regular contributor for NPR's All Songs Considered. Previously, she and Dr. Regina N. Bradley co-hosted "Bottom of the Map," a podcast about hip-hop and the contemporary American South, which was featured in Atlanta magazine, Spotify and The New York Times. She also wrote and narrated "Racket: Inside the Gold Club," an eight-episode podcast series about a months-long federal trial surrounding an Atlanta strip club, which Vulture named among the best new true crime podcasts in September 2020.