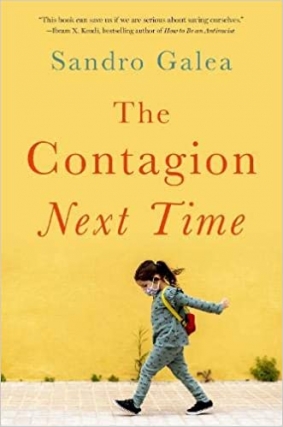 In his authoritative new book, leading public health expert Dr. Sandro Galea reveals the foundational flaws in the American health system exacerbated by COVID-19, and shows us ways to not only increase pandemic resiliency, but also build a healthier world for everyone.

The Jimmy Carter Presidential Library and A Cappella Books welcome the author for a virtual discussion of “The Contagion Next Time,” on Wednesday, November 3, 2021, at 7 PM (EST). Dr. Galea will appear in conversation with Rose Scott, host of WABE’s “Closer Look.”

A Cappella Books will have copies of “The Contagion Next Time,” which include a signed bookplate, available after the event. Pre-order via the link below.

How can we create a healthier world and prevent the crisis next time?

In a few short months, COVID-19 devastated the world and, in particular, the United States. It infected millions, killed hundreds of thousands, and effectively made the earth stand still.

Yet America was already in poor health before COVID-19 appeared. Racism, marginalization, socioeconomic inequality--our failure to address these forces left us vulnerable to COVID-19 and the ensuing global health crisis it became. Had we tackled these challenges twenty years ago, after the outbreak of SARS, perhaps COVID-19 could have been quickly contained. Instead, we allowed our systems to deteriorate.

Following on the themes of his award-winning publication Well, Sandro Galea's “The Contagion Next Time” articulates the foundational forces shaping health in our society and how we can strengthen them to prevent the next outbreak from becoming a pandemic. Because while no one could have predicted that a pandemic would strike when it did, we did know that a pandemic would strike, sooner or later. We're still not ready for the next pandemic. But we can be--we must be.

In lyrical prose, “The Contagion Next Time” challenges all of us to tackle the deep-rooted obstacles preventing us from becoming a truly vibrant and equitable nation, reminding us of what we've seemed to have forgotten: that our health is a public good worth protecting.

Sandro Galea is Dean and Robert A. Knox Professor at the Boston University School of Public Health. He has been named an "epidemiology innovator" by Time and one of the "World's Most Influential Scientific Minds" by Thomson Reuters. A native of Malta, he has served as a field physician for Doctors Without Borders and held academic positions at Columbia University, University of Michigan, and the New York Academy of Medicine. At the time of his current appointment, he was the youngest dean of a school of public health in the United States.