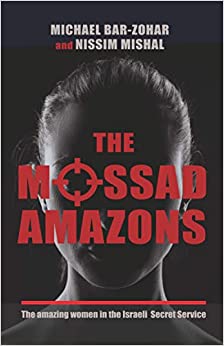 The Marcus Jewish Community Center of Atlanta welcomes author Michael Bar-Zohar for a discussion of his book, “The Mossad Amazons: The Amazing Women in the Israeli Secret Service” on Tuesday, November 2, 2021, at 7:30 PM (EST).

-Admit one for $32 (includes a hardcover copy of “The Mossad Amazons.” Price covers shipping.)

This book describes the turbulent lives, loves and perilous missions of the greatest Mossad lohamot, the female warriors of the Israeli Secret Service. The stunning feats of these strong, bold women prove that they are equal to men, and often even better. Beside the nation's enemies, they had to fight a painful solitude, an awkward attitude of their male colleagues, and often give up their dream of marriage and children. And still, they brilliantly carried out their missions. The breathtaking chapters of the book reveal the character and exploits of those Amazons, from Yolande, in the court of Egypt's King Farouk to Dina, on the threshold of Iran's Nuclear Archive; from Shula, sentenced to death by hanging, to Sigal, who recruited the best Muslim agents; from Marcelle, who jumped from the Egyptian torture chamber's window, to Yael and Isabel and Danielle, who did not hesitate to venture into the lion's mouth. Linda miraculously survived the Holocaust, Aliza broke the glass ceiling, the Trio - three young women - saved Israel from a terrible danger. And many other brave Amazons accomplished astonishing missions.

For many years, the activities of the Mossad lohamot were highly classified by the authorities. Today, the veil of secrecy has been lifted, and the Amazons' incredible exploits have been cleared for publication. At last.

Michael Bar-Zohar is a writer, public speaker and former professor at Emory University. He was a member of the Knesset, envoy to the Council of Europe and adviser to General Moshe Dayan. Dr. Bar-Zohar is the official biographer of David Ben-Gurion and one of Israel's foremost experts on espionage. He is the co-author of the international bestseller, “Mossad, The Great Missions of the Israeli Secret Service.” Bar-Zohar's books have been translated into 33 languages.