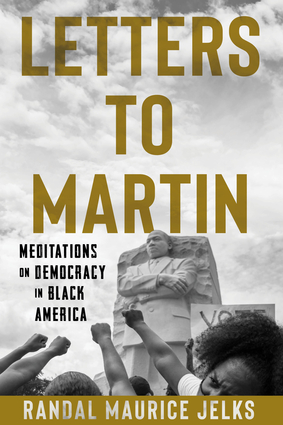 Through his moving essays in the form of letters to Dr. Martin Luther King, Jr., historian and award-wining documentarian Randal Maurice Jelks speaks to the issues we presently confront in the United States—economic inequality, freedom of assembly, police brutality, ongoing social class conflicts, and geopolitics

A Cappella Books welcomes the author for a discussion of his book, “Letters to Martin” on Saturday, January 22, 2022 at 4 PM.

This event is free and open to the public, and copies of “Letters to Martin” will be available for purchase.

“Letters to Martin” contains twelve meditations on contemporary political struggles for our oxygen-deprived society.  Evoking Martin Luther King Jr.'s "Letter from Birmingham Jail," these meditations, written in the form of letters to King, speak specifically to the many public issues we presently confront in the United States—economic inequality, freedom of assembly, police brutality, ongoing social class conflicts, and geopolitics.  Award-winning author Randal Maurice Jelks invites readers to reflect on US history by centering on questions of democracy that we must grapple with as a society. Hearkening to the era when James Baldwin, Dorothy Day, Reinhold Niebuhr, and Richard Wright used their writing to address the internal and external conflicts that the United States faced, this book is a contemporary revival of the literary tradition of meditative social analysis. These meditations on democracy provide spiritual oxygen to help readers endure the struggles of rebranding, rebuilding, and reforming our democratic institutions so that we can all breathe.