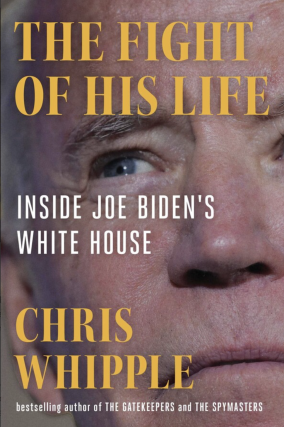 From the New York Times bestselling author of “The Gatekeepers” comes a revelatory, news-making look at how President Joe Biden and his seasoned team have battled to achieve their agenda—based on the author’s extraordinary access to the White House during two years of crises at home and abroad.

The Jimmy Carter Presidential Library and A Cappella Books proudly welcome author and Emmy Award–winning documentary filmmaker Chris Whipple for a discussion of his new book, “The Fight of His Life: Inside Joe Biden's White House.” Whipple will appear in conversation with former White House Chief of Staff to President Jimmy Carter, Jack Watson.

In January of 2021, the Biden administration inherited the most daunting array of challenges since FDR’s presidency: a lethal pandemic, a plummeting economy, an unresolved twenty-year war, and the aftermath of an attack on the Capitol that polarized the country. Waves of crises followed, including the fallout from a divisive Supreme Court, raging inflation, and Vladimir Putin’s unprovoked invasion of Ukraine.

Now, in “The Fight of His Life,” prizewinning journalist Chris Whipple takes us inside the Oval Office as the critical decisions of Biden’s presidency are being made. With remarkable access to both President Biden and his inner circle—including Chief of Staff Ron Klain, Secretary of State Antony Blinken, and CIA Director William Burns—Whipple pulls back the curtain on the internal power struggles and back-room compromises. Featuring shocking new details about how renegade Trump officials enabled the transfer of power, which key staffers really make the White House run (it’s probably not who you think), why Joe Biden no longer speaks freely around his security detail, and what he really thinks of Vice President Kamala Harris, the press, and living in the White House, “The Fight of His Life” delivers a stunning portrait of politics on the edge.

Chris Whipple is an author, political analyst, and Emmy Award–winning documentary filmmaker. He is a frequent guest on MSNBC, CNN, and NPR, and has contributed essays to The New York Times, The Washington Post, Los Angeles Times, and Vanity Fair. His first book, “The Gatekeepers,” an analysis of the position of White House Chief of Staff, was a New York Times bestseller. His follow-up, “The Spymasters,” was based on interviews with nearly every living CIA Director and was critically acclaimed. Whipple lives in New York City with his wife Cary.