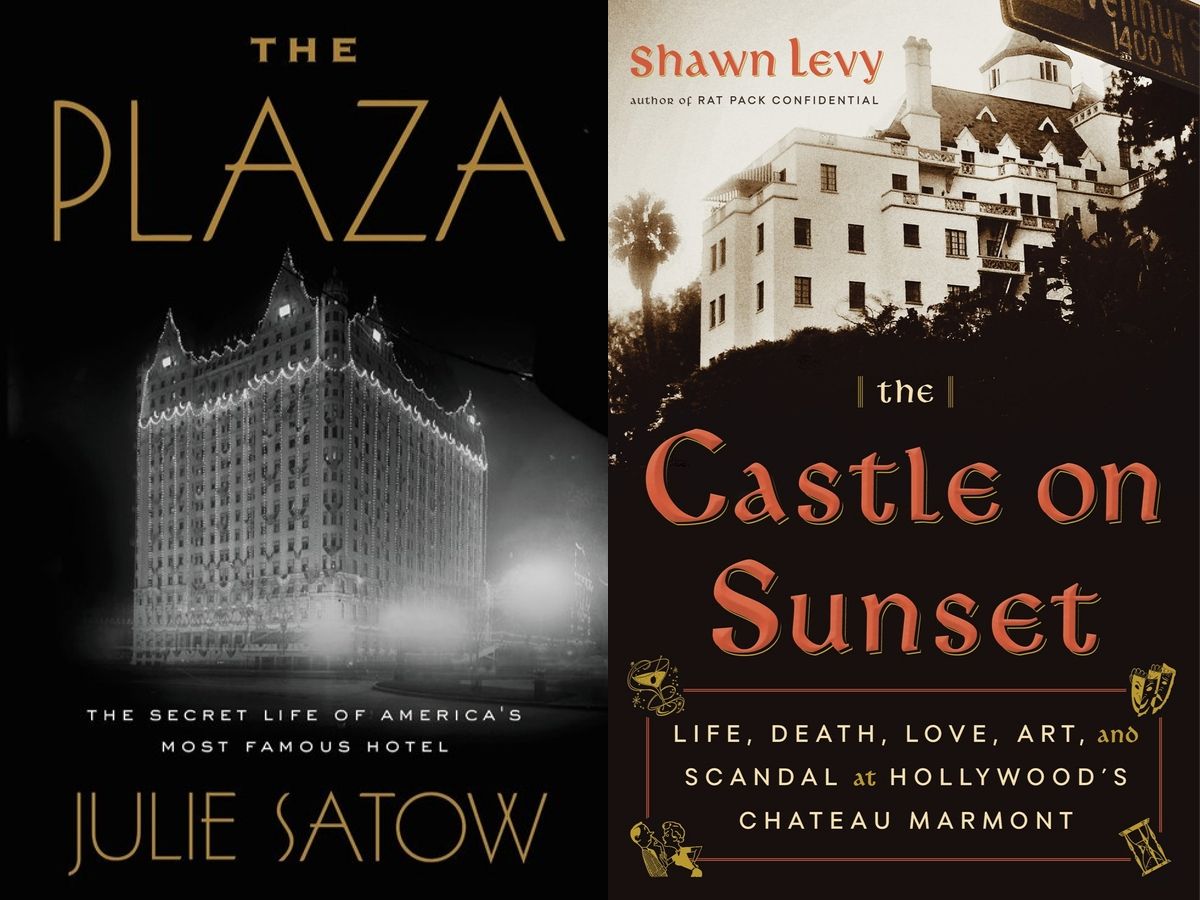 This MJCCA Book Festival event takes us from The Plaza to the Chateau Marmont.

First, journalist Julie Satow shares a thrilling, unforgettable history of how NYC's illustrious Plaza Hotel has defined our understanding of money and glamour, from the Gilded Age to the Go-Go Eighties to today's Billionaire Row.

Then, former film critic Shawn Levy has written the definitive history of Hollywood’s most iconic, storied, and scandalous hotel, the Chateau Marmont.

About Julie Satow and "The Plaza"

Julie Satow is an award-winning journalist who has covered real estate in New York City for more than a decade. A regular contributor to The New York Times, her work has also appeared on National Public Radio, the New York Post, the Huffington Post, and elsewhere.

From the moment in 1907 when New York millionaire Alfred Gwynne Vanderbilt strode through the Plaza Hotel's revolving doors to become its first guest, to the afternoon in 2007 when a mysterious Russian oligarch paid a record price for the hotel's largest penthouse, the eighteen-story white marble edifice at the corner of Fifth Avenue and 59th Street has radiated wealth and luxury.

For some, the hotel evokes images of F. Scott Fitzgerald frolicking in the Pulitzer Fountain, or Eloise, the impish young guest who pours water down the mail chute. But the true stories captured in "The Plaza" also include dark, hidden secrets: the cold-blooded murder perpetrated by the construction workers in charge of building the hotel, how Donald J. Trump came to be the only owner to ever bankrupt the Plaza, and the tale of the disgraced Indian tycoon who ran the hotel from a maximum-security prison cell, 7,000 miles away in Delhi.

In this definitive history, award-winning journalist Julie Satow not only pulls back the curtain on Truman Capote's Black and White Ball and The Beatles' first stateside visit-she also follows the money trail. "The Plaza" reveals how a handful of rich, dowager widows were the financial lifeline that saved the hotel during the Great Depression, and how, today, foreign money and anonymous shell companies have transformed iconic guest rooms into condominiums that shield ill-gotten gains-hollowing out parts of the hotel as well as the city around it.

"The Plaza" is the account of one vaunted New York City address that has become synonymous with wealth and scandal, opportunity and tragedy. With glamour on the surface and strife behind the scenes, it is the story of how one hotel became a mirror reflecting New York's place at the center of the country's cultural narrative for over a century.

About Shawn Levy and "The Castle on Sunset"

Shawn Levy is the former film critic of The Oregonian and KGW-TV. His writing has appeared in Sight and Sound, Film Comment, American Film, the New York Times, the Los Angeles Times, the Guardian, the Hollywood Reporter, and the Black Rock Beacon. He is the bestselling author of "Rat Pack Confidential," "Paul Newman: A Life," and "Dolce Vita Confidential." He jumps and claps and sings for victory in Portland, Oregon.

For ninety years, Hollywood’s brightest stars have favored the Chateau Marmont as a home away from home. An apartment house-turned-hotel, it has been the backdrop for generations of gossip and folklore: 1930s bombshell Jean Harlow took lovers during her third honeymoon there; director Nicholas Ray slept with his sixteen-year-old "Rebel Without a Cause" star Natalie Wood; Anthony Perkins and Tab Hunter met poolside and began a secret affair; Jim Morrison swung from the balconies, once falling nearly to his death; John Belushi suffered a fatal overdose in a private bungalow; Lindsay Lohan got the boot after racking up nearly $50,000 in charges in less than two months.

Perched above the Sunset Strip like a fairytale castle, the Chateau seems to come from another world entirely. Its singular appearance houses an equally singular history. While a city, an industry, and a culture have changed around it, Chateau Marmont has welcomed the most iconic and iconoclastic personalities in film, music, and media. It appeals to the rich and famous not just for its European ambiance but for its seclusion: Much of what’s happened inside the Chateau’s walls has eluded the public eye.